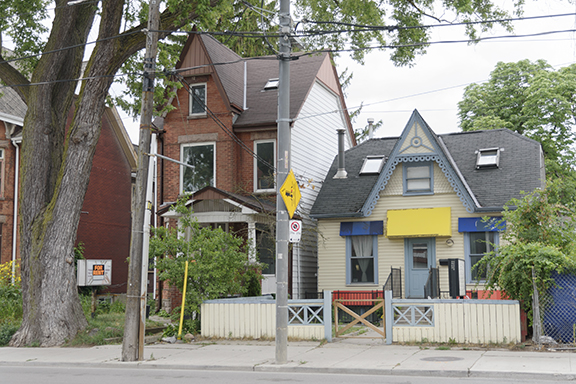 Two homes on Queen Street East in the Beach, just east of Woodbine Avenue, that heritage designation is being sought for. Photo: Adam Owen-Gill.

By ANIKA MUNIR and ZACHARY HYDE

Housing affordability is a major issue facing Toronto. It’s become hard to make it through a family gathering without the topic making its way into the conversation. While everyone recognizes the need for urgent solutions, there is also the desire to protect the places that have become cherished in the city.

Over the past 20 years developers have built highrise housing on formerly industrial land, for example in Liberty Village. However, urban development is now increasingly moving into longstanding neighbourhoods, which have strong histories and roots. Thus, the city faces a new set of challenges balancing the need for housing with what makes the city vibrant and unique.

This past summer I had the opportunity to take part in an independent study course at University of Toronto Scarborough. I focused on the analysis of super gentrification in the Beaches-East York community and its potential impacts on historical preservation.

Super gentrification refers to when a neighbourhood that has already experienced gentrification, undergoes further upscaling and rising housing costs.

Beaches-East York is an area which has experienced gentrification over the past few decades. Despite the large amount of development, the area continues to have many businesses and single-family homes. Developers built new townhouses and condominiums near Woodbine Beach, a popular tourist and residential destination.

Due to an increase in population in the city and proximity to the water, many developers are interested in building here. Proximity to transit stations, including on both the Bloor Line and the GO Train also make it a logical site for transit-oriented development.

The study was conducted using qualitative research methods. I read news articles, conducted in person observations, reviewed data from the City of Toronto, and analyzed debates on social media over the future of the area.

Growing up in the Beaches-East York area, I have been exposed to the rich history of the area from neighbours, teachers, and community members. Additionally, I have observed many events that continue to take place in the community for decades like the Beaches Jazz Festival. People in this community have been able to come together as a result of the history and culture of the area.

Old buildings have much sentimental value and can connect us to the past. Jane Jacobs, a famous urbanist explained in her book, The Death and Life of Great American Cities, how old buildings must coexist with newly constructed buildings to attract residents of all types to an area. It may cost more to reside in neighbourhoods with only new buildings due to the high construction costs. Consequently, she suggested areas should have a mix of old and new buildings that attract residents from various socioeconomic backgrounds.

As the need for more development occurs in the Beaches-East York area it is important to find which parts need to be historically preserved.

There may be a perception among many individuals that development in the area may change the culture of the area through the addition of more modern structures.

While conducting my research, I found through Urban Toronto Discussion forums the differences individuals had and how many were opposed to development.

Additionally, as I learnt about the Housing Now project at 1631 Queen St. E. there was a lot of opposition to the development from some residents who did not want the affordable housing development in their community while others made claims it went against the area’s secondary plan which works to ensure the culture is preserved in the area, when it did not. Additionally, Beaches-East York Councillor Brad Bradford’s office released a misinformation guide on their website addressing all the misinformation that was being spread about the project.

It is possible to create more different types of housing in the area by adding more development. People from all walks of life are looking for homes in the City of Toronto, and not everyone requires a large home.

While reviewing academic articles, they expressed how many young individuals are in search for rental housing in cities but find it challenging due to low supply.

The development of more land can result in the creation of more housing and more density.

Individuals in the area, however, have expressed concern via online forums and tweets that old buildings with historical significance will be demolished if development occurs or that development can ruin a buildings culture and history.

We need planning approaches that will help to preserve, grow, and develop cities as they change, and more people move into them. There is a tension between housing supply and heritage preservation in many areas of the city, including Beaches-East York.

Based on my research, I recommend that the Beaches East York area conduct a Heritage Conservation District (HCD) study in order to preserve some parts of the area while developing others in order to increase housing density.

Other parts of Toronto have conducted HCD studies and identified structures, roads and streets that contribute to the history and culture of the area.

I found that the Rosedale South study, for example, examines Rosedale Valley Road and the homes in the area that are to be preserved. It discusses some of the designers who created the homes, as well as how some homes represent an era in history through their architecture. There are photos that illustrate what the homes looked like at the time in the HCD study for that area.

If Beaches- East York does that then both development projects can occur and historical preservation of homes, businesses and streets that highlight an historical era can be preserved.

Mary-Margaret McMahon was elected as the MPP for this riding this year and previously served as a councillor for the city. During her time as City Councillor, she expressed in the media the importance of creating development to encourage people who cannot afford single-family homes to move to the area.

Also, re-elected Beaches-East York Councillor Bradford has worked very hard in the past to push for more housing development in the ward.

In the future, I hope both these elected officials will work on an HCD study to make sure that development occurs while keeping parts of the ward that add culture and history to it.

We will always be able to embrace the culture of our community based on the streets we walk on, the homes we see built before some of us were even born, and the community traditions practiced through events and festivals.

It is time that we start providing more housing options and increasing housing density in the area which will enable more people to move into this deep and connected community.