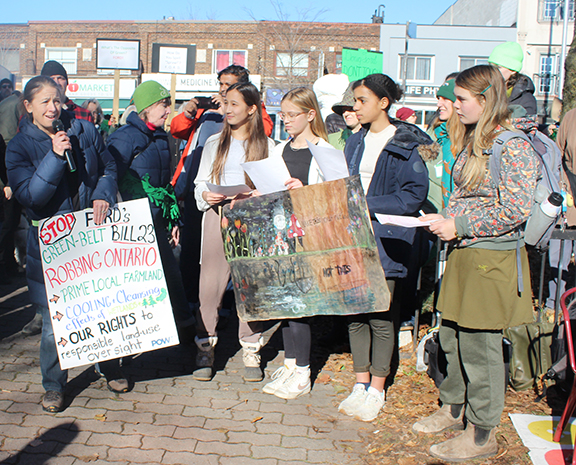 Gledhill Junior Public School teacher Chantal Leclerc, with microphone, and Equinox school students Samantha, Matilda, Yeshi and Willow at the rally to save the Greenbelt on Saturday at East Lynn Park. Inset photos show some of the signs at the rally. Photos by Alan Shackleton.

A large number of East Toronto residents turned out for a rally this weekend to tell Ontario Premier Doug Ford to keep his hands off the Greenbelt.

Residents brought signs calling for the protection of the province’s Greenbelt, which is an environmentally protected zone around and in the Greater Toronto Area including wetlands and farm land that is now under threat of being developed due to proposed legislation changes in the Ontario government’s Bill 23.

“We’re not going down without a fight,” McMahon said to those attending the rally and calling for the continued protection of the Greenbelt. “The bulldozer will have to pull me out of that amazing space.”

McMahon said Greenbelt protection put in place by the provincial Liberal government, prior to Premier Doug Ford’s Progressive Conservatives being elected with majority governments in both 2018 and 2022, were put in place for sound environmental reasons.

She said the carving up of portions of land in the Greenbelt for development will destroy the environments it was created to protect and have a profoundly negative impact on future generations.

“People are mad and they are not going to take this lying down,” said McMahon in an interview with Beach Metro Community News after the rally.

The fact that the land in the Greenbelt that the province is planning to release to be built on are owned by a small number of well-connected developers is of extreme concern, she said.

McMahon said the need to protect the Greenbelt is something she hears from politicians representing all parties and levels of government. Speaking to the crowd on Saturday, Pothen referenced the small number of landowners who will benefit from the opening up of their land on the Greenbelt for development.

“This is a plan to ensure a few landowners who bought the land dirt cheap because it was always supposed to be Greenbelt land are now being handed a Golden Ticket,” said Pothen.

He told the crowd he had been invited to speak to a Progressive Conservative riding association in an area outside Toronto about the Greenbelt, but was taken off the agenda after “a certain cabinet minister” found out he was there.

This was greeted with cries of “Shame” from those at the rally.

Pothen pointed out the Greenbelt lands are among the most vital in the province when it comes to protecting southern Ontario’s biodiversity.

“If you open the door by taking a little piece of it out here or there, that will have a huge impact on the entire biodiversity,” he said.Speakers also ridiculed the idea that Bill 23 was somehow supposed to mean more affordable housing would be built in the Greater Toronto Area.“This is not a good idea and no one believes the lie about this meaning more affordable housing,” said Pothen.

He encouraged residents to keep the pressure up on the Ford government and to let Progressive Conservative MPPs know that residents want the Greenbelt protected.

Though there are not PC MPPs in the East Toronto ridings of Beaches-East York, Toronto-Danforth or Scarborough Southwest, there are some in Scarborough, North York and Etobicoke, and McMahon suggested residents from this area contact them.

“Write the Conservative MPPs and the Premier. Fill their inboxes and call them,” she said. “Tell your friends and neighbours. Rabble rouse.”

To that end, a group of Scarborough-Rouge Park riding residents at the East Lynn park event wanted to let East Toronto residents know they will be holding a Hands Off The Greenbelt! Pop-Up Rally in their area on Saturday, Dec. 3 at 1 p.m. The rally will take place at the offices Scarborough-Rouge Park Progressive Conservative MPP Vijay Thanigasalam, 8130 Sheppard Ave. E. near Morningside Avenue.