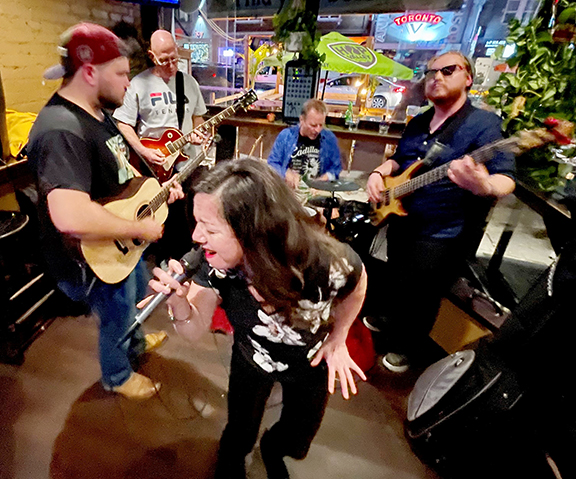 After 20 years of living in Toronto, I moved to the Beach, close to downtown without the big city hustle. I love the laid-back vibe. As Beachers know, you can go to any store and be on a first name basis with the cashier. Local baristas and servers recognize you and know your usual. The beauty of this area is the people, and one of those people is Mac Mehew.

For his entire life, Mac has been living, working and playing gigs in the Beach. If you’ve been to Sauvignon Bistro, the Green Dragon, Gull and Firkin, Stonewell Pub or Breakwall, then you undoubtedly know of or have met him.

My first interaction with Mac was on the terrasse at Sauvignon Bistro on a bustling hot summer night. Tables were full and a hungry crowd queued on the sidewalk around the corner. Mac served us, charming and calm, with a twinkle in his eye and easy smile, unphased by the chaos and heat. He’s been working at Savignon since he was 16, having worked up from a busboy to server and bartender.

Mac grew up in a musical family. Dad was a professional blues/rock singer and bass player. Mom sang in the Toronto Beach Chorale, her father was a pianist. Some of Mac’s earliest memories include sitting on the piano bench listening to grandad play Ray Charles.

When he was 13, Mac began private cello lessons. He played with the All City and Mooredale orchestras. At 17, he continued to play cello and started playing guitar and singing in local gigs. Four years later, he started working at the Green Dragon and met his wife (another Beach native) Maddie, who was also working there.

Formerly Coco’s and Bob Cajun, the Dragon has been a Beach institution for 15 years. Famous for their Dragon Wings, they were touted as one of the best places for wings by Blog T.O. Having indulged on multiple occasions, they are delicious and the portions are generous. My favourite flavour is hot.

Jam night began nine years ago, stopped because of COVID, and restarted in September. Mac started it because he wanted a place where he and some of the locals could play music and jam together.

“After a couple of weeks, we had a great line-up of musicians,” he said. “It’s where I met my bandmates David Jameson (bass) and Jamie Rendail (drums). We’ve been playing gigs as a trio ever since.”

Tracey and Matt both met Mac at Sauvignon. Tracey started last spring as a server and sang with Mac at both jam nights and at the Beaches Jazz Festival. Mac and Matt met five years ago. After three years, Matt began playing sax on some gigs. They now play together sporadically.

Playing with Mac, Matt explained is, “Like Miles Davis famously said ‘I’ll play it and I’ll tell you what it is later’. Mac is a shoot first, ask questions later kind of musician. He’ll be starting to play chords before he tells you the tune, and does so in a way that remains relaxed, easy and with a smile.”

The next jam is Sunday, Nov. 27, from 5 to 8 p.m. at the Green Dragon. Standards include R&B themed songs by Bill Withers, Stevie Wonder, Doobie Brothers along with some new stuff.

The Green Dragon is located at 1032 Kingston Rd.