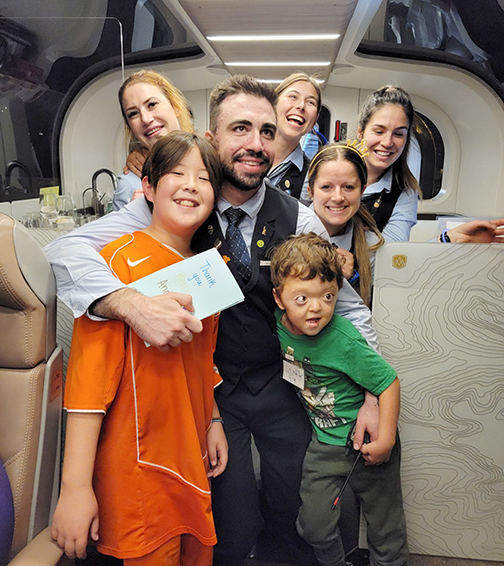 The Starlight Children’s Foundation Canada recently hosted a life-changing trip through the Canadian Rockies for a number of youngsters and their families, including seven-year-old Marshall from Leslieville.

The trip took place on the Rocky Mountaineer train and travelled between Banff, Alberta, and Vancouver, British Columbia, in early October.

Thirteen families who are part of the Starlight Foundation took part in the trip. The two-day journey on the train provided a special experience for the families and their children who have serious or life-altering illnesses.

Marshall, his aunt, his brother Quinn and mom Bridget were among the 55 participants on the trip.

“It was the trip of a lifetime and something we never would have been able to do without Starlight,” said Bridget in a recent interview with Beach Metro Community News.

The Starlight Foundation has been providing memories and experiences for families with seriously ill children for more than 30 years. The trip on the Rocky Mountaineer was free for the families who took part.

The Starlight families had an entire car to themselves on the Rocky Mountaineer, and the trips value in total for all participants was in excess of $100,000. Air fare to bring the families to Banff for the start of the trip was provided through the Air Canada Foundation.

Bridget said the trip was a wonderful experience for her entire family.

Marshall has Apert Syndrome, which is a congenital condition that attacks the skeletal system and affects the hands, feet, shoulders, hips and spine. Due to his condition, Marshall has a different appearance and that can sometimes lead to stressful situations when meeting new people.

Bridget said one of the things her entire family loved about the Rocky Mountaineer trip was that the families on it had so much in common, and appearances were not an issue.

“One of the big things for me, my son has a condition that makes him look different….and my older son is especially aware of it,” she said. “We tend to shy away from people and places where they don’t know us. I liked having this safe space where we didn’t have to worry.”

Brian Bringolf , CEO of the Starlight Foundation, said the trip was a wonderful experience especially for the families that have have gone through the isolation and challenges of the COVID-19 pandemic over the last two years.

“It was a beautiful experience for everyone,” he said. “Some of them are very obviously ill, and to see them on the train with others in a similar situation, it puts everyone at ease…They get tired of being stared at, and parents can talk about similar situations.”

Bridget said she especially enjoyed a wine-and-cheese event in the upper level of the train car with the glass-domed windows that was just for the parents. The kids and siblings were on the lower level of the car making ice cream sundaes.

“All of the kids were making sundaes and the parents were having a wine and cheese, and all of sudden there was this crazy thing where you can talk about it and what you’re going through and they get it,” she said.

Marshall, and his entire family, had a great time on the trip. A special moment for Marshall was when the Rocky Mountaineer staff gave him a conductor’s vest and declared him the manager of the train’s Starlight Foundation car for the day.

“They gave Marshall a Rocky Mountaineer conductor’s vest and it was so cool. They made him the Car Manager for the day,” said Bringolf.

Marshall was thrilled to be given such an honour by the Rocky Mountaineer staff, said his mother.

“I guess during the trip he was going to our host people and he started helping them…he was vacuuming at one point,” said Bridget of Marshall. “They made him an official Rocky Mountaineer manager and they gave him a train conductor’s vest. They gave him a tour of the train and he was on top of the world…I can’t say enough about how good they were. It was so moving.”

Bringolf had great praise for the enthusiasm and care of the Rocky Mountaineer staff.

“The staff would come to our car on their breaks…This was an emotional trip. For the 27 years I have been here, this was one of the more emotional ones for me.”

Bridget said she and her family have been involved with Starlight since Marshall was three, and it has been an important part of their lives.

“They help connect us with other families similar to ours,” she said. “The work they do is wonderful.”

For more information on the Rocky Mountaineer train, please go to https://www.rockymountaineer.com/

For more information on the Starlight Children’s Foundation of Canada and how you can help to support it, please go to https://www.starlightcanada.org/

What a wonderful and beautiful article. These are my kids! They really did have the best time.