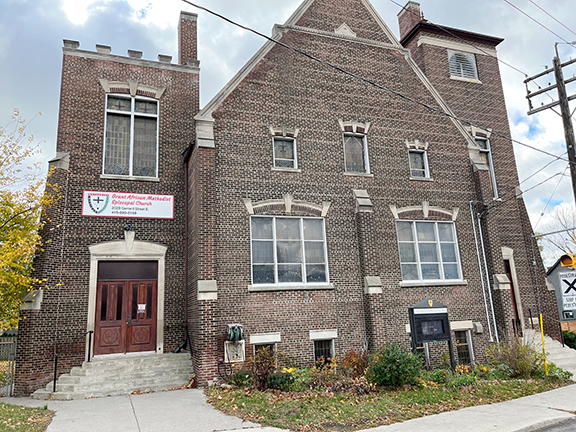 Located at 2029 Gerrard St. E. in Toronto, Grant African Methodist Episcopal (AME) Church is one of the oldest AME Churches in Canada.

In 1833, the AME Church formed congregations in Toronto. The membership at that time included both freed and runaway slaves that had escaped from the United States through the Underground Railroad, a secret passageway leading from slavery to freedom.

In the early years, members met at each other’s houses for worship. After several transitions, the site at 2029 Gerrard St. E. was purchased and became the permanent home of Grant African Methodist Episcopal Church.

Under the leadership of Pastor, Rev. Kenesha Blake-Newell, the congregation continues to be blessed by the powerful preaching and teaching of the Biblical Word, and is driven by the vision, “Committed to bringing the love of God to all, through service, evangelism and stewardship.”

All area residents are invited to join Grant AME as it celebrates its 189th anniversary during the month of November.

The theme for the anniversary celebrations is “Rejoice in the Lord! The Journey Continues…”

Each Sunday this month, there will be worship services starting at 11 a.m., and we will be highlighting significant aspects of our ministries and service to the community. Grant Church offers a place for everyone to worship, fellowship and serve.

The Sunday, Nov. 20, service will include recognition of those who serve in the MCAM (Music) Ministry, ushers, stewardess board and Sunday school.

On Sunday, Nov. 27, Grant AME will hold an Anniversary Celebration Dinner (after the church service).

Also, on Saturday, Dec. 3, the Ministry in Music Celebration will take place at the church starting at 6 p.m.

The AME Church was first located on the north side of Richmond Street West at York Street and was built between 1833 and 1851.

By 1851, its membership had grown to 128 members. The church remained on Richmond until 1912 when they moved to Elm Street on the site of today’s Hospital for Sick Children.

It was during this time that the Toronto Church was named after Bishop Abraham Grant.

The AME Church in Toronto was renamed Grant African Methodist Episcopal Church at the location on University Avenue and Elm Street. Grant AME Church was then located at 23 Soho St., in the Spadina Avenue and Queen Street West area, where it remained for 63 years before moving to the present Gerrard Street East location in 1991.