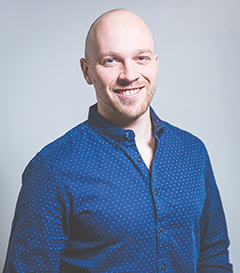 Brad Bradford began his second term as Beaches-East York’s Councillor on Tuesday, Nov.15 after a successful campaign in last month’s municipal elections. The incumbent beat out six challengers, winning 54 percent of the votes, to retain his position.

“I anticipate that the next four years will be challenging, but those challenges will also bring opportunity,” said Bradford.

One of those challenges is affordability. During the election, Bradford ran under the banner of affordable housing. He told Beach Metro Community News in an interview this week that his continued efforts in making Toronto more affordable for residents is a main priority.

“When it comes to housing we just can’t wait. We’ll get back around the planning and housing committee” said Bradford. “I’m not sure where everybody is going to be positioned with respect to the different committees. But we’ll get back to work and I hope I’m in a position to help lead on that change, providing more housing opportunities for more people in more neighbourhoods.”

Housing sits atop his to-do list, but it is expected that there will be challenges in regards to satisfying all residents affected by possible building proposals.

Housing projects often invite a vast array of complaints from unhappy residents whether about building sizes, distrust of incoming residents in supportive housing developments, or personal distaste with project locations. Such was the case at 540 Cedarvale Ave. in East York where a modular supportive housing project was built on the site of an existing parking lot considered by some community members as essential for the nearby school, park and arena.

Bradford understands the issues that may arise when it comes housing developments, affordable or not, and said he is prepared for open communication with residents to ensure their needs are being met.

“On housing or any other file, changes in our community are most successful when the local residents and organizations are a part of the discussion, planning, and execution of a project,” he said.

“It’s why I’m very supportive of community consultation that gives residents the meaningful opportunity to share their ideas and feedback early in the process.”

Bradford said it is vital to ensure that all projects begin “on the right footing and provide a strong foundation against misinformation”.

One method to prevent misinformation on projects are community liaison committees or scheduled roundtables where a clear line of communication between the councillor and local residents can be established.

A topic of discussion that can be expected during this new term of Toronto Council will revolve around Ontario Premier Doug Ford’s Bill 23 (More Homes Built Faster) legistlation which was introduced the day after the municipal election. Many, such as Beaches East-York MPP Mary-Margaret MacMahon, have expressed concern about the bill’s environmental short-comings.

Bradford appears to be on a similar page.

“While I am open to reviewing any legislation from any level of government that helps us tackle the housing affordability crisis, it’s also vital to me that we also protect our Province’s greenspaces and ecological diversity (in particular through the Greenbelt),” said Bradford.

Currently, the bill is still in the legislative process as other parties have called for amendments.

Bradford encourages residents to voice their concerns about the proposed legislation by submitting to the province at https://ero.ontario.ca/notice/019-6163

“Increasing the housing options in our communities does not need to come at the expense of the environment,” said Bradford.

“Done right, I believe we can create the right policies and legislation to advance both our environmental goals and our housing goals. Investments in green retrofits and in permitting gentle density are good examples of how we’ve done that previously.”

Bradford also gave an update on the development plans at 1631 Queen St E. (at Coxwell Avenue) which was part of Toronto’s Housing Now initiative, and has raised a lot of strong feelings in the Beach community.

Last year, Bradford said misinformation about the project prompted him to clarify residents’ inquiries regarding the height of building and if it would set a precedent for other projects along Queen Street East in the Beach.

As of now,  Bradford said he still awaits a report from the city agencies involved in the project that is set to provide 300 new residential units.

“As part of that ask, I also moved a request for the report to outline any opportunities to activate additional lands around the site, update us on the plans to relocate the important Toronto Employment and Social Service’s Branch for the East End, and provide childcare coverage during construction–as well as an update on the city’s work on Indigenous placekeeping and designs for the site,” said Bradford.

Half of the units in this particular development will be affordable – as defined by the City of Toronto. Bradford explained that in the past, the government’s definition of affordable was based on average market rents. But due to the rise in rental costs Torontonians have experienced in recent times, “we needed an updated definition that better reflected the cost of housing in relation to income and other housing costs like paying utilities”.

That update came in 2021 when, as part of the HousingTO 2020-2030 Action Plan, Toronto Council redefined affordability to be when the total monthly rent is at or below the average City of Toronto rent based on the unit type, or 30 per cent of a renter’s household monthly income (before tax).

“Housing is one of our core human needs and each situation and need can be quite different,” said Bradford.

“It goes without saying that there is more work to do on this front, and I’m always interested to hear from residents in Beaches-East York about how we can create action for housing affordability together.”

Housing is at the forefront of Bradford’s plans as he begins his new term, however, he has also stated the need to prioritize transportation, food insecurity which is directly related to the city’s affordability crisis, as well as the general security of residents.

“I know we have lots of transportation challenges here in the East End,” said Bradford. “I want to go back and start making moves on that right away.”