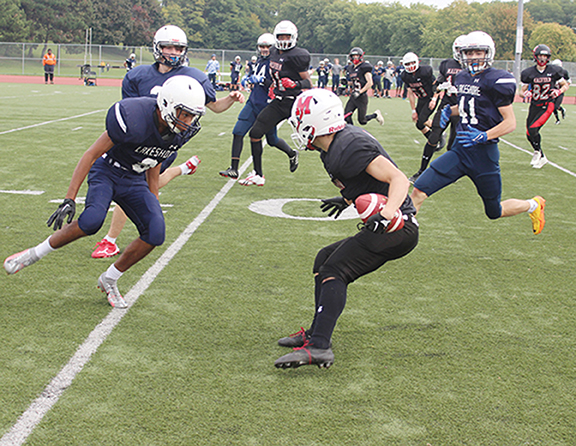 A Malvern Collegiate runner, black sweater, makes a move on Lakeshore Collegiate tacklers during high school football action earlier this season at Birchmount Stadium. Malvern won this game 20-14. Malvern and Lakeshore meet on the afternoon of Nov. 10 at Varsity Stadium for the Toronto Tier 2 championship game. Photo by Alan Shackleton.

Malvern’s opponent in the championship game will be Lakeshore Collegiate.

Malvern coach Rob Salvatore wanted to get the news out about the game in order that school alumni planning on attending were aware of the date and time.

“I know there are alumni in the area that will often come to these big games.”

Malvern plays in the three-team Toronto Tier 2 Varsity football league. Other teams in the league are Lakeshore Collegiate in Etobicoke, and Newtonbrook Secondary School in North York.