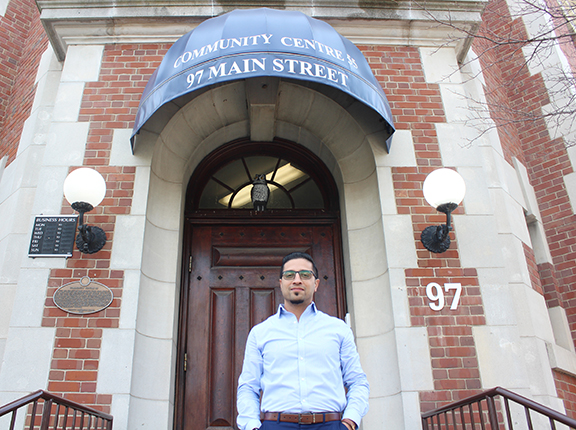 Reza Khoshdel began his job as the new Executive Director at Community Centre 55 on Tuesday, Nov. 1. Photo by Alan Shackleton.

Community Centre 55 introduced a new Executive Director, Reza Khoshdel, on Tuesday, Nov. 1. Following the retirement of his predecessor, Debbie Visconti, Khoshdel brings a wealth of expertise that will help efficiently fulfill his new role and provide assistance to the community.

“I’ve been quite fortunate to have experience in a number of industries that span both public and private sectors,” he said in an interview with Beach Metro Community News this week.

After receiving his MBA/MPA from the University of Manitoba, Khoshdel secured a position in former Richmond Hill MPP Reza Moridi’s constituency office. Khoshdel said that his time working for the Member of Provincial Parliament nurtured a growing passion for community engagement. He then moved on to Queen’s Park as a Legislative Adviser after Moridi became a cabinet minister.

“That was great because I was just knee deep into how laws were made and got an idea of how much work goes into that,” said Khoshdel.

In 2018, he then attempted to use his knowledge of the inner-workings of the political system to secure a seat on Toronto Council. Although he came up short during his campaign, Khoshdel continued to be heavily engaged in community matters. He is currently the President of the West Rouge Community Association, an organization focused on advocating for that east Scarborough neighbourhood.

As a child, growing up in Scarborough, he spent countless hours at various community centres. He said this nostalgic connection to such centres contributed to why he felt gravitated towards a position at Community Centre 55.

“It’s very near and dear to my upbringing,” said Khoshdel. “For me (community centres were) a real anchor in my life and gave me really good experiences. It was kind of like a second home to me.”

In becoming the Executive Director of Community Centre 55, Khoshdel has landed a job that focuses on his passion for community activism.

He knows he has big shoes to fill after Visconti’s retirement. Since its inception 46 years ago, Community Centre 55 has seen only two Executive Directors (Visconti and before her Bob Murdoch). Khoshdel is now the third Executive Director in the centre’s history.

Located on Main Street just south of Gerrard Street East, the centre plays an important role in the lives of many community members.

“We have people who were brought here by their parents and now they’re bringing their own kids here,” he said. “That’s a tremendous amount of responsibility on my shoulders.”

As the new Executive Director, he plans on building upon the good work Visconti has already done. Khoshdel said that there’s still a lot of work to be done but is satisfied with the programs currently being offered.

“Right now we have a pretty healthy amount of programs for our seniors,” said Khoshdel. “But I will be looking to see if there are other programs we can add to our roster to enrich their lives further.”

He went on to reveal plans to evolve the children’s program, however. Plans for new programs are currently on hold as he finalizes the appointment of a new Program Director after Evonne Hossack, who was with Community Centre 55 for more than 20 years, retired at the start of the summer.

Since he began his new role, Khoshdel has made efforts to engage the community in order to further expand his understanding of the individuals he has promised to assist.

He acknowledged that the experience of some of his senior staff members who have been at the community centre for many years helps him “to fill in the gaps” in regards to some of the things a new member of the team, like himself, might not be privy to.

“It’s challenging but fun being able to learn about all these individuals—who they are, their history,” said Khoshdel.

Filling the important role of Program Director has been a main focus since his arrival at Community Centre 55. But now that a suitable candidate has been chosen, Khoshdel is redirecting his attention to helping families facing food insecurity issues during this holiday season.

He discussed changes to the Share A Christmas Program which has helped many families in Toronto’s east end over the years. Usually, the workers and volunteers hand out food, “but logistically that was very difficult to manage,” said Khoshdel.

The program has since transitioned to utilizing gift cards that families can use to purchase goods of their choice for their Christmas celebrations.

“My goal is to ensure that the people that are relying on this program over the last few years are going to get the same service, or even better, this year,” said Khoshdel.

Khoshdel is also looking forward to the Beaches Santa Clause Parade on Sunday, Nov. 27, which he describes as one of the biggest events in the community.

This year’s parade will see a slight change of route, he said, due to operational issues. The parade’s starting location was changed following the installation of a sprinkler system at the starting point. His team is currently finalizing the updated route.

Although Khoshdel has only been on the job for a short period so far, he told Beach Metro Community News that he intends to replicate the collectively respected legacy of his predecessors and dedicate himself to Community Centre 55 on a long-term basis.

Khoshdel’s hope for Community Centre 55’s future is to see even more people getting engaged. He aims to help the organization expand its footprint in the community which, in turn, will help him and his team to serve a larger number of people in a more effective manner.

“I think that will take time, but there is a lot of space to grow in that aspect,” he said.