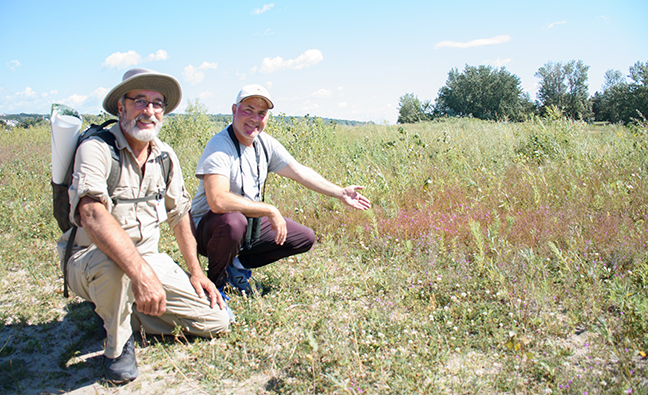 Clyde Robinson, left, and Noam Markus show some of the slender false foxglove plants in the natural area at the west end of Woodbine Beach during a walk-through with Beach Metro Community News in the late summer. The area is a rare habitat and needs to be protected, they say. Photo by Adam Owen-Gill.

The calls to protect what is considered to be environmentally sensitive land at the west end of Woodbine Beach appear to be gaining traction as the City of Toronto recently announced that a disc golf course that had briefly been in the area last year will not be re-installed at the site.

Local environmentalists Clyde Robinson and Noam Markus have been drawing attention to the increasing biodiversity of the natural area located at the beach’s west end and to the east of Ashbridges Bay Park.

“This is a very rare habitat, that has rarely been seen elsewhere in Toronto,” said Markus of the area.

“If you don’t look closely, you don’t know what’s going on here. People are not able to recognize that it is more than an empty lot…It’s not just grass growing here. It’s sedge grass and rushes….ground nesters are laying their eggs and pollinators are flying over.”

Markus and Robinson helped produce a report on the area and the many differing kinds of kinds of plants, birds and bees that are calling it home.

The report was shared with the City of Toronto in late August, and may have played a role in what the city’s plans for the area will be in the future.

In the immediate future, one thing that will not be happening is the re-installation of what had been the Beaches Disc Golf Course South Course.

That nine-hole addition to the existing North Course which is on parkland closer to Lake Shore Boulevard East opened in the fall of last year, and immediately raised the concerns of environmentalists and bird watchers who said the location was inappropriate.

In March of this year, the city removed the metal baskets and tee posts that had been located in the area and vowed to undertake an environmental evaluation of the area.

“The evaluation included a multi-disciplinary, on-site review by staff as well as consideration for concerns expressed by the residents,” said Donna Kovachis, Director, Parks for the city in response to questions from Beach Metro Community News sent last month.

“City staff have since completed this evaluation and, in consideration for the ecological impact the course would impose, have determined that the additional nine-hole disc golf course will not be re-installed.”

She said the city will continue to review other locations for the additional nine holes “that may better accommodate a course.”

Both Robinson and Markus said they were pleased by the city’s decision, but still questioned why it had ever been put at that location in the first place.

They said “many questions will now arise as to how the area will be designated or treated” by the city.

Kovachis said at this time an additional nine-hole disc golf course is not being considered in the areas of Woodbine Beach, Woodbine Park or Ashbridges Bay Park.

“The city will undertake a public consultation prior to the installation of any additional disc-golf courses,” she said.

Jeff MacKeigan of the Beaches Disc Golf Course said his group will be happy to work with the city on finding a space for the additional nine holes.

“We’re excited for a new location of the nine baskets and will continue to enjoy the existing nine-hole course,” he said. “We encourage everyone to come out and play disc golf. The course is free and open all year round, so it’s a great way to get outside and into nature.”

A late-summer walk around the area at the west-end of Woodbine Beach with Robinson and Markus revealed to Beach Metro Community News a wide variety of plants, birds and bees in the area.

“It’s not hay” growing at the site, said Noam. “There is such diversity. There’s 160 species of plants growing here.”

And 27 of them are considered species of concern according to the report he helped put together and submit to the city. That report can viewed online at https://noam195.wixsite.com/west-woodbine-beach/post/woodbine-beach-dune-habitat-biodiversity-and-damage-report-summer-2022

Some of those plants include three types of milkweed that are critically important for migrating pollinators such as Monarch butterflies.

Also among the rare plants identified was umbrella flatsedge which is considered a species of regional concern, said the report.

“This rare plant species, thought to have been extirpated from the region, was documented in the habitat in 2020,” said the report. That was the “first regional observation in over 100 years, from this habitat,” the report said.

Markus and Robinson said the area is becoming one of the most important and accessible bird watching locations in Toronto.

Birds spotted in the area include the ground nesting killdeer, Savanah sparrows and song sparrows. Numerous species of bees, wasps, dragonflies and beetles were also identified, according to the report.

Markus said the area has also become an important area for migrating birds.

“It’s a crucial stopover between the Rouge and Tommy Thompson Park (Leslie Spit),” said Noam. “We need to do our part and help them” he said of the migrating birds.

Both Robinson and Markus want to stress that future plans for the area will require a wide range of public input and need to take note of the growing habitat at the west end of Woodbine Beach.