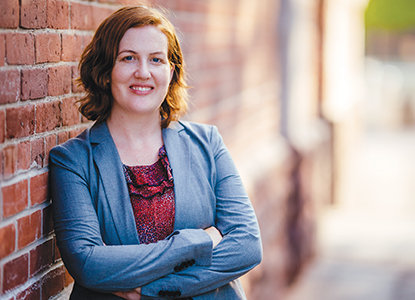 Sarah Ehrhardt was elected the new Toronto District School Board trustee for Toronto-Danforth in the Oct. 24 municipal election. Photo: Submitted.

The Toronto District School Board (TDSB) will have some new trustees from East Toronto as a result of last week’s municipal election.

While Ward 16 Beaches-East York incumbent trustee Michelle Aarts was returned for a second term, both Ward 18 Scarborough Southwest and Ward 15 Toronto-Danforth will have new trustees representing them as neither of those races had an incumbent trustee running for re-election.

Malika Ghous was elected as the new trustee for Scarborough Southwest in what proved to be a very close race.

She secured her seat as trustee after defeating Anna Sidiropoulos by 63 votes.

The trustee seat was open in the ward after incumbent Parthi Kandavel to run for councillor in  Scarborough Southwest. Kandavel lost the race for councillor to Incumbent Gary Crawford in what also a relatively tight finish.

In Ward 15 Toronto-Danforth, Sarah Ehrhardt won to become the new trustee by a quite comfortable margin.

Incumbent trustee for Toronto-Danforth Jennifer Story had stepped down from the position,  and did not run in this year’s election.

Ehrhardt won with more than 61 per cent of the votes cast. She had 13,962 votes, while second place finisher Sukhpreet Sangha had 3,787 votes.

On paper Ehrhardt, who is a long-time supporter of the New Democratic Party, had an easy victory. But she pointed out that “it’s called running in an election for a reason.”

“I don’t think my family would say it was easy,” said Ehrhardt. “Nearly every evening I was out knocking on doors across the ward, and every other spare moment responding to emails and other messages.”

Ehrhardt told Beach Metro Community News that she made sure to visit schools at the morning drop-offs on a regular basis as well as “attending school and parent council meetings, and visiting as many school events as I could”.

She did so to gain a better understanding of parents’ concerns and their vision for the future of the schools in which their children attend.

A main point of concern, according to Ehrhardt’s discoveries, was the safety of children within the boundaries of their schools. She also noted that the individuals she spoke to have a desire to be kept fully informed about TDSB decisions and what is happening in their schools, as well as the need to address the “social, economic, and institutional barriers that many kids and families face.”

“It was a wonderful experience to be connecting with so many in our community,” said Ehrhardt.

One notable figure she connected with during her campaign was incumbent Toronto-Danforth Councillor Paula Fletcher. A former TDSB from trustee from 2000 to 2003, and then ward councillor since them, Fletcher continues to be a powerful advocate for the community, said Ehrhardt.

Although Ehrhardt’s landslide victory came as a result of the hard work put into her campaign, a part of this victory came thanks to Fletcher’s mentorship and endorsement. “It is humbling to have received support because of this association, and I will work hard to continue to deserve this support,” said Ehrhardt.

As new trustees with the TDSB, Ehrhardt and Ghous will now begin their respective relationships with the Ontario Ministry of Education and the provincial government which holds pretty much all of the broad power when it comes to education in the province.

“Public oversight is vital in a democracy, to make sure that decisions align with the community’s needs,” said Ehrhardt. “And having a local perspective is even more important to make sure that individuals and communities aren’t forgotten.”

Ghous did not return a request from Beach Metro Community News to comment on her election.