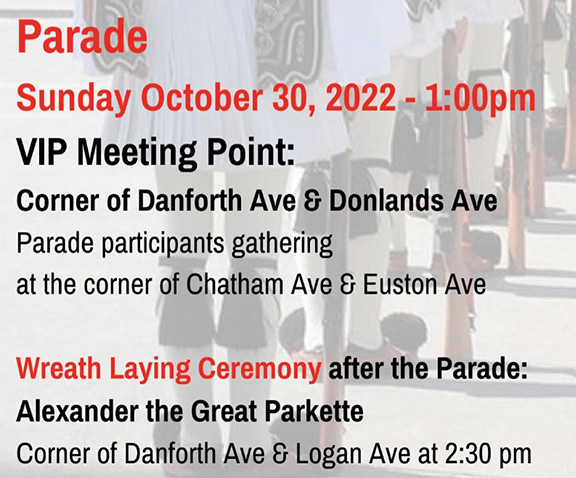 The Greek Community of Toronto hosts its annual Oxi Day parade along Danforth Avenue on the afternoon of Sunday, Oct. 30.

The Greek Community of Toronto hosts its annual Oxi Day parade along Danforth Avenue on the afternoon of Sunday, Oct. 30.

The parade takes place on Danforth Avenue between Donlands and Broadview avenues and is slated to begin at 1 p.m.

Oxi Day marks Greece’s defiance against fascism during the Second World War. On Oct. 28, 1940, Greek Prime Minister Ioannis Metaxas said ‘Oxi’ (no) to Italian dictator Benito Mussolini’s demands that Italy be given control of strategic sites in Greece or face a declaration of war. By saying ‘Oxi’ to Italy, Greece entered the Second World War fighting against the fascist forces of both Italy and Germany.

Sunday’s parade will be followed by a wreath laying ceremony at Alexander the Great Parkette at Danforth and Logan avenues.

This marks the Oxi Day parade’s return to Danforth Avenue after a two-year absence due to the COVID-19 pandemic.