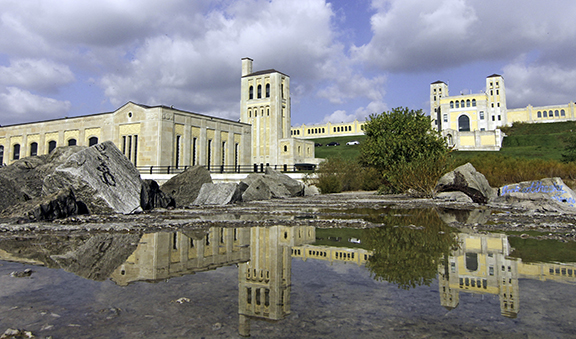 The R. C. Harris Water Treatment Plant is seen in this file photo from the archives of Beach Metro Community News. The plant will be the end point of an historic walk set for the afternoon of Saturday, Oct. 29, that will be hosted by Gene Domagala.

On Saturday, Oct. 29, at 1 p.m. I will be hosting the second half of the Queen Street East historic walk.

The portion of the walk will cover the area between Lee Avenue and the R. C. Harris Water Treatment plant at the far east end of Queen Street East.

For those who wish to take part, we will be meeting in front of the Beaches Branch Library (2161 Queen St. E.) just east of Lee Avenue.

Did you know this is the 20th anniversary of the year Queen Street East was chosen as the Best Main Street in Ontario by TVO (TVOntario)?

Queen Street East is important in many ways including history, recreation, education, religion and entertainment just to name a few.

It has the distinction of being home to the oldest continuously run motion picture house – the Fox Theatre – in Canada. But do you know the original name of the Fox and why it was changed?

There were also two other theatres on Queen Street East located east of Lee Avenue, one of them opened four years before the Fox.

We also have historic churches that will be included on our walk.

One of them is 140 years old, and another had its beginning in a church that sometimes would attract 1,500 people and had to hold services outside in a tent.

Some of the buildings we will see are listed as heritage because of their architecture and historic significance.

We also had a funeral parlour on Queen Street East, though many people do not know that now.

We’ll also visit a famous local restaurant that has Good Food and a name that has become legendary in Toronto and beyond. Can you guess its name?

There are many people who have contributed to the history of Toronto and Canada who have called Queen Street East and the side streets running off it their home. One of them is Dr. Fred Urquhart and his wife Norah who discovered where Monarch butterflies go when they migrate. Another is a distinguished agriculturist who invented and cultivated Marquis Wheat which became the staple of the Prairie Provinces and their farming.

We will also visit the site of the house of Mrs. Jessie Cunningham where during the First World War it was used as a boarding house by her for more than 20 young Canadians who signed up to join the army including her own son.

There are many other historic stories along Queen Street East including banks, apartment buildings, the sites of former amusement parks, and of course the R. C. Harris Water Treatment Plant.

I look forward to seeing you on Saturday, Oct. 29 at 1 p.m. in front of the Beaches Branch Library for the start of the walk.