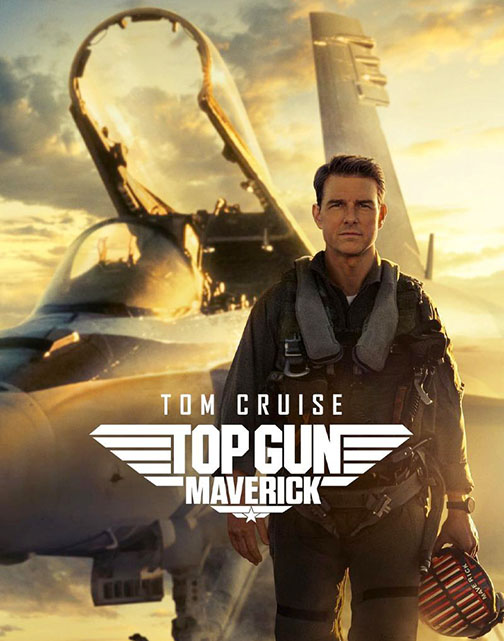 Local student Brady Burkett shares his reviews of upcoming movies showing at the Fox Theatre on Queen Street East in the Beach. Here is his review of Bullet Train..

It’s become commonplace for studios to bank on nostalgia by rebooting old franchises from the 1980s and ’90s, from Ghostbusters to Jumanji, to mixed success. Despite how common this has been, there still was a lot of hype surrounding Top Gun: Maverick in the months up to release; the marketing mainly centring around the unprecedented level of stunt work involved in its production. As Tom Cruise tells us at the beginning of the film, “It’s all real speed.”

The real question, however, is whether or not Top Gun: Maverick is ultimately a good movie at its core, beyond this impressive but admittedly somewhat gimmicky premise. The answer, plain and simple, is yes.

Top Gun: Maverick is an immensely entertaining, crowd-pleasing action movie that almost everyone will enjoy to some degree.

I feel that for context I should establish what my thoughts on the original Top Gun are. They are not positive. Although the unintentional homoeroticism is extremely funny (and sorely lacking from the recent sequel), the film has no sense of pace, the action is confusingly shot, and it lacks any tension for the majority of its runtime. Tom Cruise is charming and Goose’s death is somewhat impactful, but the entire experience is ultimately mediocre.

Top Gun: Maverick is a marked improvement in almost every respect.

The pacing is dramatically improved, and the movie now has an excellent flow, keeping a consistent build of tension as it goes on with a clear goal that the story builds towards. The characters are now much more memorable and distinct compared to each other, as opposed to the generic interchangeable army drones that make up much of the original’s cast. The dialogue is incredibly cheesy and full of one-liners, but it’s largely tongue-in-cheek and for a movie like this, I wouldn’t want it any other way.

In terms of story, this sequel centres around Maverick returning to Top Gun years later to train a new generation of pilots to attempt a near-suicide mission. One of the members is Rooster, Goose’s son, and the film focuses on Maverick’s attempts to train the pilots whilst also reconciling with Rooster and, in turn, his own past. There is also a subplot involving a romance with Jennifer Connolly that… is about as forced as the one in the first movie, but fortunately eats up much less overall screen time.

The Rooster subplot is much more compelling, with Maverick’s grief over Goose affecting his ability to train, which in turn frustrates Rooster, causing him to push himself further than he can manage. The bond that slowly forms between them as the story goes on is surprisingly touching, but it sadly was not focused on nearly enough. If the Jennifer Connelly romance was cut and replaced with more screen time for this dynamic, the movie would increase by an entire number score.

But you don’t care about that, do you? You are here to learn about this movie’s entire selling point: the action.

Now, I will be the first to admit that I have always preferred fast-paced, incredibly creative action over slower-paced, more technically impressive action. That said, I’ve already received heaps of that this year through Bullet Train and especially Everything Everywhere All at Once, and so Top Gun: Maverick’s approach ultimately proved refreshing.

To make a long story short: it’s fantastic. The action consistently tops itself in scale and intensity throughout the movie, creating a steady upward slope in the quality of the action, peaking with its excellent climax.

It is absolutely unbelievable that almost all of this was accomplished in real life, with real fighter jets, and that element of metatextuality only adds to the magnificence of it all. The way it’s filmed is equally impressive, with the cinematography making every beat extremely easy to follow, improving tenfold on the muddled confusion that were the original’s dogfights. The action is easily the best part of the entire film.

So overall, Top Gun: Maverick is extremely good, and a marked improvement on the disappointing original. The action is unbelievably excellent, the characters are likable and memorable, and the cinematography is excellent. With a slightly cleaner, more focused script this would easily be one of the best of the year.

As is, it’s an incredibly fun crowd-pleaser that will delight both those who saw the original in theatres and those who are only experiencing these characters for the first time now.