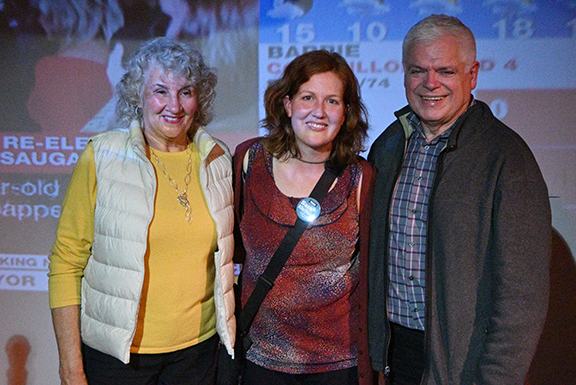 Incumbent Paula Fletcher was easily re-elected to another term as councillor for Ward 14 Toronto-Danforth in Monday's municipal election. Here she celebrates at The Duke on Queen Street East on election night with elected Toronto-Danforth public school trustee Sarah Ehrhardt and Peter Tabuns, Toronto-Danforth MPP and interim leader of the Ontario NDP. Photo by Alexandros Varoutas.

Incumbent Paula Fletcher has secured another term as councillor for Ward 14 Toronto-Danforth.

When asked about the strong mayor legislation, however, there was some concern.

“People are a little worried about what Doug Ford has planned for the city and they want to make sure there’s strong, independent voices at city hall to keep us moving in a good direction,” she told Beach Metro Community News.

Another major concern is the Ontario Line, which runs ride through Fletcher’s riding. Residents are concerned that they’ll see the same level of disruption on Danforth Avenue as they have on Eglinton Avenue from all the construction for that transit line.

Fletcher, who was first elected in the 2003 election, has been the councillor for a ward in the Toronto-Danforth area since 2003.

She was also a Toronto District School Board Trustee from 2000 to 2003.

In the 2018 election, the newly created Ward 14 Toronto-Danforth was doubled in size due to Premier Doug Ford’s decision to half the number of wards in the City of Toronto.

This led Fletcher, who represented the ward south of Danforth Avenue, to run against Mary Fragedakis who had been the incumbent councillor for the ward north of Danforth.