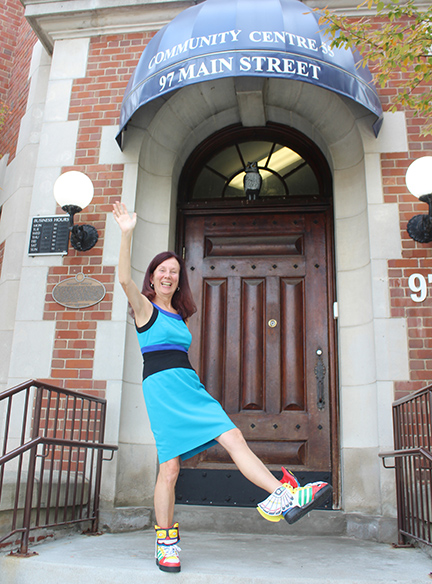 After 12 years in the role, Debbie Visconti will be retiring as Executive Director of Community Centre 55 this month.

Visconti started at Community Centre 55 (CC55) in 2010. She took the job after a 29-year career with a major Canadian bank, and said it was a decision she has never regretted.

“It was the best decision of my life to come here,” she said. “It has been my pleasure and I am so thankful for the support. It’s all been good, and now it’s time to go.”

Visconti became only the second Executive Director that CC55 has ever had. After Bob Murdoch, who had been in the position since CC55 first opened on the site of the former police station on Main Street in 1976, retired she was approached by a number of people regarding applying for the job.

Visconti was already a volunteer member of CC55’s board at the time, using her banking experience to serve as treasurer.

“I was certainly not looking for another job, but Bob Murdoch was retiring after 30 years and he said, ‘You should apply for it’ and I got it,” said Visconti.

She had been a volunteer on the board since the 1990s and always felt connected to CC55 and the East Toronto community.

She grew up in the neighbourhood, living on Woodlee Avenue which is just west of the centre, and she attended Kimberley Public School which is directly across the street from CC55.

“It’s such a pleasure to be able to look out my office window and see my old school,” said Visconti.

She did point out that Kimberley has been rebuilt since she went there, but the site of the old school is now the new school’s playground. After Kimberley, she attended Bowmore school and then went to high school at Monarch Park Collegiate.

Her father Roy Semple went to Malvern Collegiate, before leaving at age 17 to join the Royal Canadian Air Force during the Second World War. Visconti said her dad wanted her to go Malvern as well, but she decided on Monarch Park. After high school, she attended Ryerson (now Toronto Metropolitan University) where she earned a business degree.

After graduation she was hired by Scotiabank where she worked in a number of positions including being international projects manager for the bank in the Caribbean.

Visconti admitted to being a bit nervous at the time about leaving her long and secure banking career to come and work at a community centre.

“I was scared. I didn’t really know if the skills that I had were transferable,” she said.

However, Visconti said her decision to try something new with CC55 also came at the “right time in my life and it was so different from what I was doing.”

She said there are many people and organizations she wants to thank for the support they have given her and CC55 over the past 12 years.

Her children, Vanessa, 21, and Michael, 26, and her husband Rick have been critically important in that support, she said.

“My kids practically grew up here,” she said of CC55.

Her children and husband regularly volunteered for programs and events including Share A Christmas. “They’ve been coming out and helping as volunteers and have just been so supportive,” she said.

Visconti also wanted to personally thank Gene Domagala, the Beach’s super volunteer and local historian, for the key role he plays not only with CC55 but the entire community.

“Gene was very close to Bob, and he is a strong presence in the community. I am so grateful to him. He comes in every day and I know I can always count on Gene to help with whatever we are doing. He has been extremely helpful and has always had my back, and I will miss him here.”

Visconti won’t be too far from the community as she lives in southwest Scarborough, and will be continuing in her role as Executive Director of the Grace Pascoe Centre Food Bank at Calvary Baptist Church, which is just south of CC55 on Main Street.

She said the need for food banks is growing all across the city, including the East Toronto area, and that is something she has seen in her roles with both the food bank and CC55.

“There is a lot of food insecurity. I’m thankful we were able to get that back (the Grace Pascoe food bank) going after COVID,” she said. “We helped bring back the volunteers and it is really meeting a need in the community. They have 200 people on the night they are open, and that shows how tough it is out there.”

Visconti also sees that need in CC55’s Share A Christmas program which marked its 40th year of helping local families during the holidays in 2021.

For the last two years because of COVID-19, Share A Christmas had to swerve from a program that collected thousands of pounds of non-perishable food donations to one that gave out thousands of dollars in grocery gift cards to those in need. That required a big financial ask from the community as the program now needed their money as opposed to their volunteer hours helping to sort and pack food donations, she said.

“I can’t thank the community enough. They are so generous when we need them,” said Visconti of the ongoing and changing support that has been given to Share A Christmas.

When the daycare first started, it had about eight children. Now there are more than 300, some full-day and others before and after school, at four different locations. Visconti said the need for affordable daycare Toronto is also growing.

“We could fill up a number of school classrooms if the schools could give us the space,” she said. “We have been able to keep prices reasonable, and we give very good care for a reasonable price.”

Visconti said the seniors program, which offers activities, bus trips and outings, and communal meals, is also very important to the community.

“People would move away from the area but they’d still come back by Wheel-Trans to our events,” she said.

“For some of them it’s all about the social aspect and being able to get together. We offer meals so people don’t have to eat alone. People just love the trips…It’s increasingly important to support people as they age.”

She also thanked the CC55 board for its support of her and the staff.

“The board has been fabulous and very supportive of everything we do,” said Visconti. “We have a small but powerful staff.”

The new Executive Director will be Reza Khoshdel, and he officially starts on Nov. 1.

Visconti said he wishes him as much success and fulfillment as she has had in the role at CC55.

And while she will no longer be with CC55, Visconti said she will be taking part in this year’s Beaches (Hamper’s) Santa Claus Parade, which helps kick off the Share A Christmas program.

The Beaches Santa Claus Parade did not take place the last two years due to COVID-19. But is back now and is slated to take place along Kingston Road on Sunday, Nov. 27.

Though she will be officially retired, Visconti said she intends to be there – dressed in a costume as she always is for the parade.

“Everybody who knows me knows that I love a parade and a costume, so I think I’ll be there.”

In retirement, Visconti said she and her husband will just be doing more of the things they already like to do which are travelling and going to concerts.

Wow, pretty cool write up. I always loved Rick, such a great guy. Nice to read he married fantastically well and has a happy family!