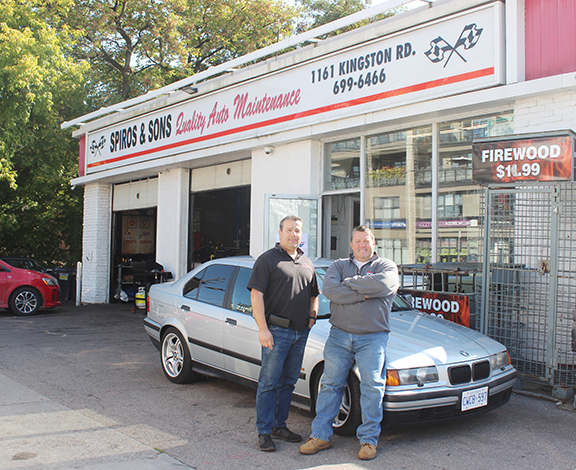 Tom and Paul Koskinas in front of Spiros & Sons this week. The service station is closing down after 27 years at the corner of Kingston and Courcelette roads. Their dad Spiros, who they opened the business with in 1995, was not available for the photo as he is in Greece at the moment. Photo by Alan Shackleton.

Sometime towards the middle of this month, Paul and Tom Koskinas will be closing down the car repair centre and gas station they have been running on Kingston Road on the corner of Courcelette Road for the last 27 years.

Spiros & Sons has already stopped pumping gas at the station and the auto repair portion of the business could be closed by as early as Oct. 17, but a final date has yet to be set.

When they opened back in 1995 in partnership with their father Spiros (hence the name Spiros & Sons), the gas station they bought had seen better days.

But they soon cleaned it up and made it a trusted business and a part of the community for almost three decades.

“It took more than a week just to clean it up,” said Paul of the site when the family took it over.

Their dad Spiros wanted to run “an old-school service station” on the site, he said. That meant not just pumping gas full service, but also doing repairs to customers’ cars.

The combined service station model has pretty much disappeared as it is mostly now self-serve gas stations and separate car repair centres.

The Koskinas family always owned the station though they got the gas from different oil companies over the years, including most recently Top Valu and also Pioneer which was the gas they pumped when they first opened.

“Everybody is going to self-serve and corporate-owned gas stations now,” said Tom. “It was time to close it.”

However, though they are out of the gas pumping business they are moving the car repair service to a new location at 301 Danforth Rd., between Birchmount and Warden avenues. Which means they are still in the general area and available to their longtime and loyal customers who depend on them.

Along with keeping the car connection, the Koskinas family will also be maintaining their link to the southwest Scarborough and Beach communities as they still own the land at Kingston and Fallingbrook that the station was on.

Planned for the site now is an eight-storey condominium called the Courcelette.

It is a project that the Koskinas family is directly involved in as they did not want to just sell the land and take no responsibility for what was built there.

They wanted to make sure that was built on the corner would not problem for the neighbourhood.

“We didn’t want to sell and just walk away and let them do what they wanted with it,” said Tom of the decision not to sell to a developer and to maintain ownership of the land themselves.

“We want this to blend in with the community and be done the right way,” he said.

“We still own the land and we have partnered with a company to build the condo,” added Tom.

Making sure the building will be environmentally friendly of constructed to the highest LEED standards was very important to the family, he said.

“The neigbours will love it. It was better than us just pulling up. We leave a beautiful building here rather than a gas station.”

Tom said the family had received substantial offers for the property in the past but wanted to keep it in the family and make sure whatever was built was an asset to the neighbourhood.

“They gave us great support and we wanted to do the same,” he said.

The idea to build on the site started before COVID, and Tom said they went to the City of Toronto and talked with local planners about what would be appropriate for the site.

The eight-storey Courcelette is a “boutique” condo featuring 56 units of varying size up to three bedrooms. It is being built by Windmill Developments.

Prior to opening at Kingston and Courcelette, the Koskinas family had owned a Sunoco station also in Scarborough.

On behalf of the entire family, Paul and Tom said they wanted to thank the community for the great support they have been given over the past 27 years.

“Everybody has just been so supportive. We could not have asked for better neighbours,” said Paul.

“Right from Day One I felt like it was a family here with the customers and everyone,” said Tom. “I want to say thanks for the 27 years of incredible support.”

They officially shut the pumps down on Sept. 28 and stopped serving gas at that time. They are now in the process of closing the service centre portion of the building prior to its demolition for the residential project.

Tom said customers who have come to trust them with their vehicles have been saying how sad they will be to see them leaving the immediate neighbourhood. “They were coming and saying, ‘Oh my goodness, what will we do?’”

At the station on Tuesday, Oct. 11, Paul and Tom said the feeling that this part of their lives and business was coming to an end really started to sink in when they stopped pumping the gas.

“It really hit us then,” said Paul. “Customers were still coming to the pumps to us for gas as we were pretty much one of the last full-service stations.”

For more information on the Courcelette building and its plans, please go to https://courcelettecondo.com/?utm_source=officialwebsite