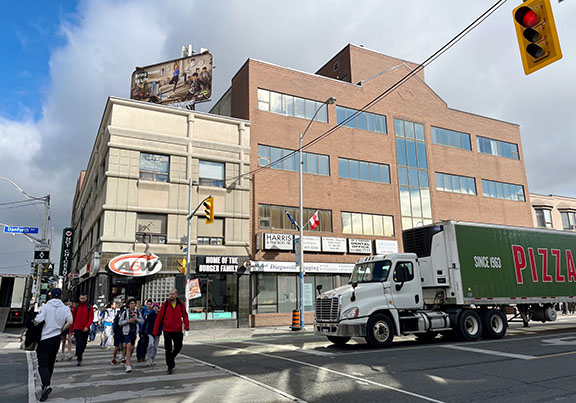 The City of Toronto has received a proposal to build a 49-storey mixed-use building on the northeast corner of Danforth and Pape avenues. Photo by Alan Shackleton.

The City of Toronto has received applications under the Planning Act to amend zoning bylaws for two new highrise buildings in prominent East Toronto locations, including a proposal for a 49-storey mixed-use building at the northeast corner of Danforth and Pape avenues.

The proposal has been made by the Goldberg Group on behalf of property owners Del Boca Vista Properties Inc. & 717 Pape Inc.

It calls for three levels of underground parking and will include 496 units. The ground level will have a shared residential and office lobby. Facing Danforth Avenue and a portion of Pape Avenue will be retail and commercial spaces.

The proposal states that the third to fifth floors will be strictly for office spaces and floors six to 49 will be reserved for residential use only.

The 20,064-square-metre residence will include a six-storey podium and an on-site park that will be about 215 square metres in size.

Currently at this location is a three-storey residential rental building (20 Cosburn Ave.) and low-rise residential buildings. According to a Rental Housing and Screening Form submitted to the City of Toronto, there are about six units on the present site

Applications for both proposals have been circulated to City of Toronto divisions for feedback according to the Development Application Information Centre, and will have to be considered by Toronto-East York Community Council.

Public input meetings will also have to be scheduled for both proposals as part of the application process, but those dates have yet to be set.

Although rent prices have seen a drastic hike in the past year, it is currently unclear whether these buildings will include affordable units.

For more information on these and other development proposals, please go to the Toronto Application Information Centre website at https://secure.toronto.ca/AIC/index.do and type in the address of where the proposal is located.