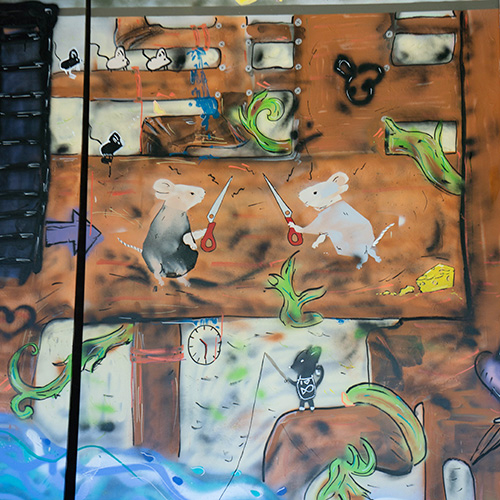 The Girls & Enby Mural Camp exhibition will be one of the art installations on display along Danforth Avenue during Nuit Blanche celebrations starting on the night of Saturday, Oct. 1. Image: East End Arts.

East-end residents will have the opportunity to experience the many art installations of Nuit Blanche, Toronto’s annual art festival, for the second year in a row.

On Saturday, Oct. 1, starting at 7 p.m. and continuing through until 7 a.m. on the morning of Sunday, Oct. 3,, Toronto will wear a new look through contemporary art. There will be free art exhibits in Scarborough, Downtown, Fort York, West Queen West, North York, Danforth East and more.

Started in 2006 and the largest contemporary art festival in North America, Nuit Blanche only recently expanded the celebrations into Wards 14 (Toronto-Danforth) and Ward 19 (Beaches-East York) thanks to the work East End Arts.

Hillman said that since COVID-19, there has been an increased importance in Nuit Blanche reaching neighbourhoods outside the city’s core rather than just downtown where most of the resources are exhausted.

Hillman expressed excitement for the In View installations which has paired 20 artists with 20 local businesses and property owners who have agreed to transform their windows into galleries.

One of these can be found at the constituency office of Beaches-East York MPP Mary-Margaret McMahon.

McMahon has invited Natalie Very B., an award-winning Polish-Canadian illustrator and muralist, to display her piece titled Our Unconscious on the office windows at 1821 Danforth Ave.

As well as In View, four major art installations will be displayed on Danforth Avenue during Nuit Blanche this weekend.

During the night, Nuit Blanche visitors can stop by East End Art’s Info and Refresh Station located at the parkette at Coxwell and Danforth avenues. Located here will be washrooms (including one accessible washroom), information on other hubs around the city, a #EastEndLove merchandise sale and staff available for further inquiries.

There will be a number of restaurants available for sit-down dining and refreshments. For late night snack and hang out locations, as well as a hub map for with all the information and locations of artists and installations for Saturday’s night of festivities, please visit the East End Arts website at https://eastendarts.ca/nuit-blanche-east-danforth-2022/