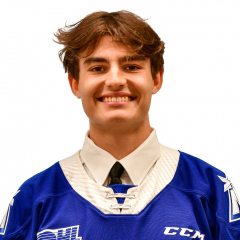 Beacher Finn Harding is starting his first season with the Mississauga Steelheads of the Ontario Hockey League. He recorded his first point, an assist, in his first regular season game on Sept. 29.

Beach resident Finn Harding has signed with the Mississauga Steelheads of the Ontario Hockey League (OHL), and is looking forward to the team’s home opener of the Junior A season on Sunday, Oct. 2.

Harding, 17, was selected by the Steelheads in the eighth round of the OHL Draft in 2021 (151st overall). He most recently played for the Toronto Junior Canadiens prior to joining the Steelheads.

He began his hockey journey with skating lessons at the outdoor rink in Greenwood Park, and then with the late Bob Acton at Ted Reeve Arena.

Standing as six-foot, one-inch, and weighing 182 pounds, Harding is slotted in as a right-shooting defenceman on the Steelheads’ blueline.

The Steelheads host their regular season home opener on Oct. 2 against the Sudbury Wolves at the Paramount Fine Foods Centre in Mississauga.

In the opening game of the regular season on Thursday, Sept. 29, in Niagara Falls against the Ice Dogs, Harding notched the first point of his OHL career when he assisted on a goal by James Hardie. Mississauga won the game 4-3 in overtime.