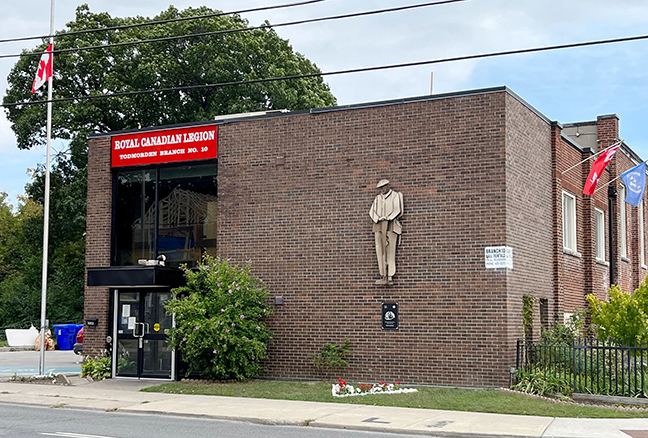 The Heroes of Suicide Memorial March on the evening of Sunday, Sept. 25, will conclude with a service at the Royal Canadian Legion's Todmorden Branch 10 on Pape Avenue. Photo: Alan Shackleton.

As we approach the end of Suicide Prevention Month, The Royal Canadian Legion is aiming to raise awareness about mental illness caused by PTSD.

The Legion’s Todmorden Branch 10 in East York will be hosting its seventh annual Heroes of Suicide Memorial this Sunday, Sept. 25.

The event remembers the lives of men and women of the Canadian Forces, First Responders and others serving our communities who have lost their lives to suicide as a result of Post Traumatic Stress Disorder (PTSD).

“This illness is quite personal and takes great courage to step forward and admit that you are affected,” said Lily Phillips, Todmorden Branch 10 Secretary and Heroes of Suicide chair.

“Each death from suicide have a tragic impact on families, friends and colleagues.”

The memorial, which includes a march as well as Candlelight service, helps provide an environment of support for the families and friends left behind. In attendance on Sunday will be Toronto-Danforth MP Julie Dabrusin, Interim Leader of the Provincial NDP and Toronto-Danforth MPP Peter Tabuns, other dignitaries, and friends and family of the heroes being remembered.

The march begins at 6:45 p.m. at Todmorden Lane and Gamble Avenue. Participants will travel along Gamble Avenue towards Pape Avenue before proceeding north on Pape to Woodville Avenue. It will end at Todmorden Branch 10 Cenotaph located at 1083 Pape Ave.

Following the march, a service which includes a wreath placement in honour of the veterans, as well as a re-dedication of the Soldiers of Suicide (SOS) Memorial Plaque, will be held at 7 p.m. There will also be bell ringing during the service to honour fallen members of the Canadian navy, Toronto Fire Services and the Toronto Paramedic Services.

According to a Royal Canadian Legion Branch 10 press release, more than 150 Canadian forces members and first responders have taken their own lives due to mental struggles from PTSD. According to a National Defence report, suicides among Canadian Armed Forces regular forces between 1995 and 2019 were more than 240 ( https://www.canada.ca/en/department-national-defence/corporate/reports-publications/health/2020-report-on-suicide-mortality-in-the-caf-1995-to-2019.html ).

“As this is a very personal matter, it is not always revealed how many people have succumbed to their illness,” said Phillips. “However, it is widely believed that the numbers reported at any given time are underestimated.”

The Royal Canadian Legion has recognized mental illness as “one of the most widespread health issues in Canada” and continues in its commitment to raise awareness about PTSD within the community.

“The most effective way for the Community to show support for the men and women of the Canadian Armed Forces and First Responders (Fire, Police and Paramedics) and others serving their Community, whose lives ended by suicide due to PTSD issues, is to come out to this service in large numbers,” said Phillips.

Todmorden Branch 10 is the only Royal Canadian Legion Branch in Toronto with a service of this magnitude and dedicated plaque honouring soldiers of suicide. For more information about the memorial, please contact Phillips at lmphillips8438@gmail.com