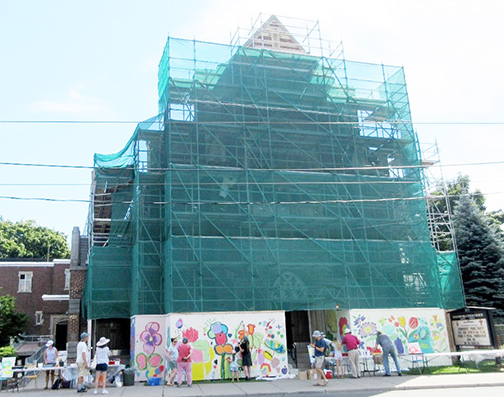 Community members recently helped to paint the construction hoarding at Kingston Road United Church while work is being done on the roof. Photo by Ginny Virginia Hobbs Huebsch.

Perhaps you have heard the saying … “if you want to make God laugh, tell her your plans.” I have thought of that phrase often in the past few years since becoming the minister at Kingston Road United Church.

Here’s why I think God is amused at me being in a position of offering spiritual leadership to a faith community that has to raise hundreds of thousands of dollars to replace the 100-year-old roof of their building.

Number one … I failed math all through high school … I had to go to summer school after Grade 13 just to get my average up so I could get into university. So when it comes to numbers, interest and mortgage rates, investments and dividends … my eyes glaze over. It’s hard for me to stay in the game. I am grateful for the patience of wise elders that explain things in accessible language.

Number two … almost everything I have done in ministry over the past three decades has been program related, and often done outside a church building.

This includes university chaplaincy, church camps, retreat centres, and small groups in peoples’ homes. Even when I was the lead minister in a congregation in Halifax for four years before I came to Toronto, it was with a congregation that left its building in 2009 and was worshipping in a music conservatory.

At the conservatory they became a total pop-up church. We had to roll everything out to the concert hall every Sunday morning and then roll it all back in when we were done. I didn’t have a permanent office. If I had to meet someone I did so in a coffee shop, or when the secretary wasn’t in her tiny office that was rented for her. And for me, that all worked.

I never much thought about the importance of a church building because it wasn’t the focus of my ministry. When I came to Kingston Road United Church in 2018, I was quite taken aback with how busy everything was during the week … with choirs of all ages, Zumba classes, a daycare, church groups, Friday lunches, dog-walkers, music concerts … and much more. Even a bowling alley that people still use.

I found myself doing a complete turnaround about church buildings. When the scaffolding first went up around the building in preparation for the replacement of the roof, many of us were shocked at the sheer magnitude of it.

It looked ominous. Unfriendly. Forbidding. Depressing even. When I expressed that to someone I know well, she said “Oh I think it’s great! It says to me ‘something’s happening here’”.

I was surprised at that completely different way of looking at it. Gradually, I began to open myself up to that interpretation. There WAS something happening.

In theological language, I would say that the spirit is moving in and through the community. The congregation was taking a leap of faith that said “we believe that this is a valuable resource to our community, and to preserve it we need to spend a lot of money that we don’t have yet.”

On Aug. 20, under the vision and leadership of KRU member Tim Dawson, many in the congregation and community came out to beautify the boards surrounding the building while the project is ongoing.

It was a glorious day, and brought much joy to all who were walking by. Plus, it was a very successful fundraiser as KRU turns from fundraising internally to fundraising externally to members of the community.

And to me, the end result – the beautiful paintings all around the building – says “There’s something happening here.” The spirit is moving indeed.