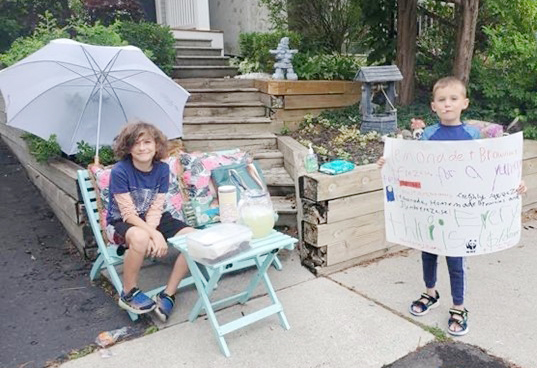 As an increasing number of people join the fight against Toronto’s food insecurity, more local non-profit food programs are being created.

One, in particular, has stood the test of time. Formerly known as the Glen Rhodes Foodbank, Nourish East End has serviced residents of the Beach, Leslieville, and East York for more than 40 years.  The program runs out of Glen Rhodes United Church on Gerrard Street East, which is now part of the East End United Regional Ministry with church buildings at Glen Rhodes and Eastminster on Danforth Avenue.

With help from Daily Bread, Second Harvest and other food donors, Nourish East End provides a free food market at Glen Rhodes for families requiring additional assistance to make ends meet. Every Wednesday, residents from all parts of Toronto can access the food market following a registration process that requires proof of income.

“One of the things we’re focusing on is trying to demystify why people access food banks and emergency food services,” said Jarah Carlson, Community Services Officer at Nourish East End. “Sometimes, people have ideas about why others may access these services but [those ideas] are not exactly the reality.”

The organization receives more than $600,00 worth of food donations annually, serving roughly 500 people in more than 240 households according to their Program Director, Brent Alexander.

During the height of the COVID-19 pandemic, Nourish East End also provided a food hamper delivery program which increased the reach to 700 people in about 370 households.

“We were all expecting [our client base] to decline because of recovery in employment,” said Alexander. “But with the inflation, a lot of people who were on the cusp of being able to afford things again were all of a sudden not able to afford anything.”

Unlike the hamper program, the food market allows families to shop for items that suit their individual needs–with limits on the amount of items each person can take depending on supply.

A survey conducted by Carlson revealed that about 90 per cent of their clients use the service weekly. The same survey, which consisted of approximately 40 people, also showed that 88 per cent of them rely solely on Nourish East End for their emergency food needs.

“That comes down to our services dignifying our clients,” said Carlson. “We sort through the food that we’re given because sometimes we do get rotten items. But if you wouldn’t eat rotten food, why would they?”

Appreciation for the service is evident in the make-up of the staff. Excluding Carlson, Alexander and Communications Specialist Emily De Melo, who are all compensated through a government grant, workers at Nourish East End are there on a volunteer basis. About 40 per cent of these volunteers are also clients who were inspired to take part.

Like the volunteers, other residents have been inspired to participate in the program too. De Melo told Beach Metro Community News a story about two local kids, Sebastian (9) and Dominic (7).

Last year, they ran a lemonade stand and felt a need to give back. So the brothers “took money they made from this lemonade stand – that they worked so hard for – and purchased gift cards” from a local toy shop, Swag Sisters on Gerrard Street East, said De Melo.

In a display of kindness, they then donated the gift cards to Nourish East End where they were distributed to children at the food market. At least 20 per cent of all sales went to the food market as well as the World Wildlife Fund, according to their boys’ mother.

“The smile on these kids’ faces is so exciting,” De Melo said in regards to the children who received Sebastian and Dominic’s gift.

“It’s just a very sweet thing to think of the initiative these young boys showed to help other kids that could be their neighbours,” said De Melo.

Following the gesture, Swag Sisters decided to match every gift card purchased by the brothers with ones of their own.

This year, Sebastian and Dominic repeated the act, this time purchasing gift cards from a local ice cream shop. Which goes to show the impact of and support for Nourish East End’s in the community.

“We did it (ice cream vouchers for Glen Rhodes) because the people were local and they needed food,” said Sebastian and Dominic’s mother. “We wanted to give other kids a cold treat that they probably wouldn’t be able to have otherwise.”

Alexander pointed out that programs such as Nourish East End should not be considered the solution to Toronto’s food insecurity crisis.

“We are not the answer,” said Alexander. “We are a Band-Aid. We do not want to exist, but we need to help the community and this is the best way to help at the moment.”

Anyone interested in donating food to Nourish East End is encouraged to do so on Mondays between 8 a.m. and 11 a.m. or Wednesdays between 9 a.m. and 4 p.m. at the Glen Rhodes Church Campus, 1470 Gerrard St. E., between Rhodes Avenue and Craven Road.