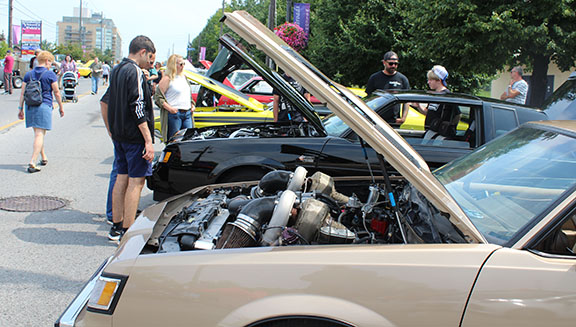 The Wheels on the Danforth festival will return to the streets of East Toronto on Saturday, Aug 13. After a two-year hiatus because of the COVID-19 restrictions, the festival is making its comeback.

Presented by the Crossroads of the Danforth BIA, the festival is centred around the junction of Danforth Avenue and Danforth Road from 11 a.m. to 11 p.m.

Wheels on the Danforth has become one of Toronto’s most anticipated community street festivals and will feature food stalls, restaurant patios, entertainment performances and the highly popular car show that will pack the streets with vehicles on display for awards and prizes.

Liane Murillo, the organizer for the Wheels on the Danforth festival, said organizers are excited the festival is coming back after a tough two years for businesses affected by COVID restrictions.

“Through the festival, businesses bring awareness to the area. It is about promoting various businesses and increasing participation of people. These events also have a positive impact on the economy of the city and our festival is no different. So we are excited about that,” she said.

Murillo added that the festival started off as a small one-day community event in 2010 in a local park and went on to do the same for two years before it was decided to expand and bring it to the streets in order to involve more businesses. Since 2012, Wheels on the Danforth has been a full fledged street festival.

The Saturday, Aug. 13, morning portion of the show will feature a number of classic cars on display while the evening car show usually attract a younger demographic of car enthusiasts and their vehicles.

The festival will also be hosting a two-day event called ‘Glamour Girls and Garage Girls’ which will celebrate the women of today while paying homage to the women of the past.

The festival will also see a performance from country artist David Boyd Janes.

Other bands scheduled to perform  at the festival are Little Peter and the Elegants, Greystone, Elvis – John Cigan, The Two Fours, Shoor and Stephen’s Garage.

The festival will conclude with a performance by buskers on their bicycles called ‘Light up the Night” later on in the evening of Aug. 13.

The festival will officially open on the evening of Friday, Aug 12, with a screening of the movie The Goonies and other family events at Oakridge Park between 6 p.m. and 11 p.m.

Murillo said that over the years, Wheels on the Danforth has gained immense support from the diverse community in the area and has promoted new businesses.

“We have got new businesses in our area this year with over two years of COVID. There has been a great turnover. They are pretty excited about having the event,” she said.

For more information on this month’s Wheels on the Danforth, please visit the website at https://www.wheelsonthedanforth.com/

A well written article and heaps of interesting information.