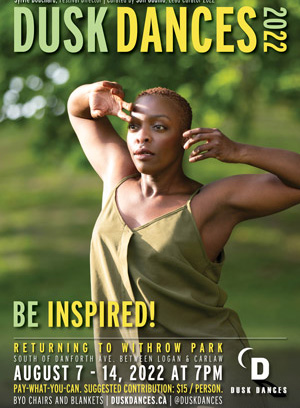 Dusk Dances 2022, a celebration of outdoor dance, will take place in Withrow Park from Sunday, Aug. 7 through to Sunday, Aug. 14. Dance performances begin each evening at 7:30 p.m. Prior to the performances there will be house dance workshops starting at 7 p.m. each night in the park.

Dusk Dances 2022, a celebration of outdoor dance, is set for Withrow Park this month.

This year’s performances in the park, located south of Danforth Avenue between Carlaw and Logan avenues, will take place from Aug. 7 to 14.

Dance performances set for Withrow Park each evening are The Tagore Project; To My Past, Present and Future…; Three Turtles In The Park; and Earth – Synergy.

A Dusk Dances premiere, The Tagore Project is described as:

“Two dancers settle into their memories and find their anchor in the music and poetry of Indian Nobel laureate Rabindranath Tagore. They dig into their personal histories and embark on a journey of togetherness. They bring their recollections into the present through their individual practices of Indian classical dance (Kathak, Bharatanatyam, Odissi). As children too, they danced to the songs of Tagore. Seeped into nostalgia, they honour the Bengali culture that nurtured them. They hope that this intimate celebration brings them closer to Tagore, to their language, families, and communities.”

Music director for The Tagore Project is Hasheel, and dramaturg is Harikishan S. Nair.

To My Past, Present and Future… is choreographed and performed by Nickeshia Garrick.

Also a Dusk Dances premiere it is described by Garrick as being “about the deconstruction and reconstruction of self, where you will see the vulnerability and intimacy of my truths through the evolving relationship between a black body and nature.”

Garrick is also costume designer for To My Past, Present and Future…and collaborated on the music with Uche Ama.

Three Turtles In The Park is choreographed by Lina Cruz of Fila 13 Productions.

It will be performed by Yuichiro Inoue, Jason Martin and Antoine Turmine. Music is by Phillipe Noireaut.

Three Turtles In The Park is commissioned by Dusk Dances and this will a world premiere of the dance.

Earth -Synergy is choreographed by Shameka Blake of Artists in Motion.

It will be performed by Marquisha Sparkes, Diane Jean-Louis, Onija Bennett and Derick Robinson. Music composer is Allen Rho.

Also a Dusk Dances premiere, Earth – Synergy is described as:

“A primordial origin story exploring our individual connections to the cyclical nature of time through the four elements and experimentation with energy, physicality, and musical dialogue.”

The Dusk Dances performances in Withrow Park are pay-what-you-can events, but a contribution of $15 per person is suggested.

Those attending are asked to bring their own chairs and blankets to sit on.

For more information on this year’s Dusk Dances in Withrow Park, please go to https://duskdances.ca/en/season2022_Toronto.php