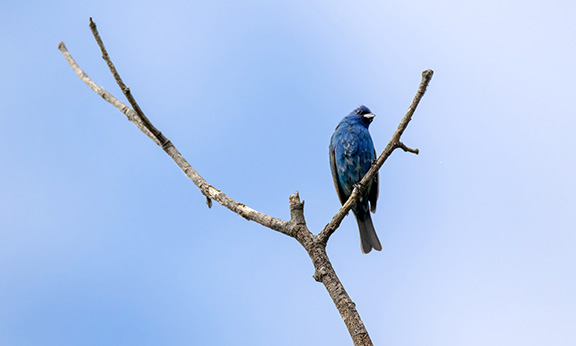 An Indigo Bunting is seen in a tree branch. On The Wild Side columnist Ann Brokelman writes that it is one of the prettiest birds in Ontario. Photo by Ann Brokelman.

Do you remember being a little kid and being very concerned with picking a favourite colour? It was a big deal back then, like having a favourite number.

Whenever my grandkids tell me about their favourite colours, they often follow up by asking about mine. Though it’s so hard to pick, I’ll usually tell them about a special shade of blue called indigo. When they ask me why, I try to talk to them about one of the prettiest birds we have in Ontario: The Indigo Bunting (Passerina Cyanea). At this point they usually get bored and run away, but I’m hoping you, dear reader, are going to continue with this story.

These birds stand out to me because I only spot them on rare occasions. The females are basically brown and could easily be mistaken for a sparrow. The males, however, are such a distinctive blue that you can’t possibly mistake them for anything else.

They are rather tiny birds, which makes identifying them at a distance difficult as well. In all my years as a photographer, I’ve only managed to get a handful of decent shots of them. Though I can check them off my ‘to see’ list, I don’t have a picture of them that I’m happy with. But some day I will.

The other day, I was out and about and had one of my best series-of-random-bird-sightings ever. I was just driving down a side road when a male Pileated woodpecker, being chased by another woodpecker, zipped across the road. They began to chase each other around a hydro pole, so I pulled off to the side and watched the show.

Pileated woodpeckers aren’t uncommon for me to see, but the chase was something new. Just as they flew off into the trees, and I looked over my shoulder to check for traffic before I pulled back onto the road, a beautiful American Goldfinch landed a few metres away and began disassembling a plant into nesting materials.

These gorgeous, yellow birds are always a welcome sight, and of course the idea of them getting ready for chicks brings a smile to my face.

When this bird flew away, a few seconds later, I turned my car on, looked for traffic again, and began to pull forward. It was at this moment when an Indigo Bunting popped onto a tree branch right in front of my car!

My jaw dropped, and I’m sure I let out an excited squeal. (Thankfully nobody was around to hear it!) Sadly, he only stayed for a few moments, and I barely even had a chance to reach for my camera before he was gone. Despite the lack of a picture for my collection, I’ll happily take the sighting any day.

Both male and female Indigo Buntings are the size of a common sparrow: 11.5 to 13 centimetres. Interestingly, the male buntings will have different colours depending on season. They are a vibrant blue while in the breeding season and then a dull brown/black in the off season.

Now, even more interesting is that the male’s true feather colour is actually black. Thanks to their feathers’ ability to refract light, when they are seen in the light they look blue.

Blue is an incredibly rare colour to occur in nature, and several animals that we think are blue are actually just doing similar tricks. Blue Jays and Bluebirds? Not really blue! Look it up!

Like many birds they migrate at night using the pattern of the stars to guide them.

They can live for one to 15 years, and a group of bunting are called a decoration, mural, or a sacrifice. Buntings are mostly insectivores, so they love to eat bugs, flies, spiders, etc, but they might still be attracted to your yard’s bird feeders.

Let me know if you see any this summer! Bye for now!