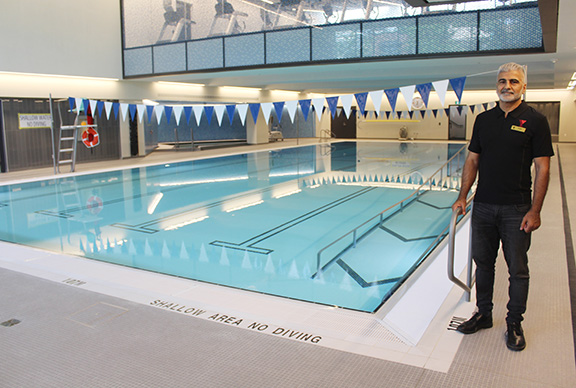 Mehdi Zobeiry, General Manager of The Steve & Sally Stavro Family YMCA on Kingston Road, stands in front of the facility’s 25-metre pool during a tour with Beach Metro Community News last Friday. The pool features an accessible entry ramp. There is also a pool lift chair at the facility. Inset photo, the full-size gym at new Y is ready for action as of Aug. 15. Photos by Alan Shackleton.

After a long wait, The Steve & Sally Stavro Family YMCA on Kingston Road will be officially opening its doors on Aug. 15.

And as of Wednesday, July 20, area residents are invited to sign up and book tours of the 63,990-square-foot facility located on the south side of Kingston Road between Beech and Balsam avenues.

Work on the new YMCA, which includes a condo building above it, first began with a ground-breaking ceremony in October of 2015. Opening had anticipated to be in October of 2020, but that did not happen.

“Yes, it has not been the smoothest development process,” said Mehdi Zobeiry, General Manager of The Steve & Sally Stavro Family YMCA, during a tour of the facility with Beach Metro Community News on the afternoon of Friday, July 15.

“Two-and-a-half-years of pandemic threw a lot of things of out whack. But we had to have the building finished and safe (before we could open).”

Excitement, and some frustration, has been building in the East Toronto community as the condos above were seen to be inhabited and people who looked through the ground-floor windows of the Y saw a full swimming pool. People were wondering why the facility had not yet opened and were confused by the delay.

Zobeiry said he saw and heard that in his interactions with residents while he was on site helping get the finishing touches done.

“Every day when I’d open the door people were asking us when we were opening,” he said. “We know the community is looking forward to the opening and we have been hearing that a lot. We are very excited to be announcing the opening.”

Nora Gorman, Senior Vice President Marketing Communications with the YMCA of Greater Toronto, thanked the community for its patience.
“We are thankful for and appreciate the community’s patience,” said Gorman, who also took part in the July 15 tour with Beach Metro Community News.

Run by the YMCA of Greater Toronto, the Stavro facility replaces the former East City Y at the site which was built in the 1950s. The East City Y was much smaller and did not have a pool.

The new Y features three pools—a four-lane, 25-metre lap pool, with a ramp entrance making it fully accessible; a fitness and therapeutic pool with a movable floor to control the depth; and a whirlpool on the pool deck.

The facility will also have a conditioning/weight room, multipurpose fitness studios, meeting rooms and a full-size gymnasium.

Zobeiry said the Stavro Family Y will be a community hub for people of all ages and abilities since it fully accessible.

“We are really looking forward to people coming in and using the facility,” he said.

As is the case with many YMCA facilities, they quickly become community gathering places offering a wide variety of uses for residents which go beyond fitness and swimming and into programs for young people and seniors..

“There will be multi-purpose rooms for groups to use, and youth leadership programs, places to meet…We have something for every age,” said Zobeiry. Since it is a charity, the YMCA of Greater Toronto puts a focus on including all community members in its programs and offers financial assistance for families who may need it to help cover costs associated with joining.

“This is not just a fitness centre. It’s a place where kids learn to swim, kids get their first jobs as lifeguards, work at a camp or go to a camp, become youth leaders,” said Zobeiry. “We are a centre of the community as opposed to just a community centre.”

In the news release announcing the Aug. 15 opening date, President and CEO of the YMCA of Greater Toronto Medhat Mahdy said the facility will play an important role in helping bring life back to normal for many people after the pandemic.

“We know the community has been keenly awaiting an opening date for The Steve & Sally Stavro Family YMCA and we can’t wait to open our doors,” said Mahdy. “We are confident this centre will help improve the physical and mental well-being of local residents – something that’s even more important as we emerge from the pandemic.”

The new Kingston Road Y was made possible thanks to many donors who supported the YMCA’s Strong Start, Great Future Capital Campaign, including The Steve & Sally Stavro Family Foundation. The Y is named for the Stavro family’s deep connection to the east end Toronto community and their support for the charity, including a $1 million donation from the Steve & Sally Stavro Family Foundation, said the news release.

“A passionate sportsman, entrepreneur and philanthropist, Steve Stavro and his family settled into what was then the city’s emerging east end in 1932. The founder of the Toronto City Soccer Club, Stavro later became controlling owner of the Toronto Maple Leafs and Toronto Raptors, bringing the two franchises together to create Maple Leaf Sports and Entertainment,” said the news release. “The centre’s naming was also supported with a $2 million gift from an anonymous donor and numerous contributions from additional donors. Together, our donors’ generous support means residents in Toronto’s east end are gaining expanded access to essential services and inclusive community spaces.”

To learn more or to arrange a tour of the Steve & Sally Stavro Family YMCA on Kingston Road as of July 20, please go to https://stavrofamily.ymcagta.org/

The opening of the new Y will be Aug. 15, but a formal grand opening celebration with dignitaries and special guests is expected this fall.