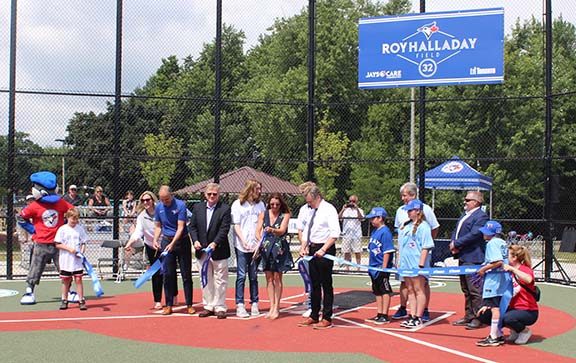 Brandy Halladay, centre, is joined by her sons Ryan and Braden, along with other dignitaries including Mayor John Tory and Scarborough Southwest Councillor Gary Crawford at the ribbon cutting for Roy Halladay Field in Highview Park on July 13. Inset photos, youngsters from Variety Village play the first official game at the new Roy Halladay Field on July 13. Photos by Alan Shackleton.

The legacy of late Toronto Blue Jays pitcher Roy Halladay will live on in southwest Scarborough as the field named after him officially opened on Wednesday, July 13.

It was built in partnership with the Jays Care Foundation and the City of Toronto, and is specially designed for Challenger baseball which allows people of all abilities, including those with cognitive and physical disabilities, to play the game.

While in Toronto, the Halladay family was strongly committed to giving back to the community and in particular to helping children facing challenges.

“One of our dreams when we were here was to build a field like this,” said Brandy. “To see this happen, Roy would have been so proud.”

After the opening ceremonies and ribbon cutting, a game was played on the field with young athletes from Variety Village, all of them wearing Blue Jays sweaters with the number 32 (Roy Halladay’s number) on them.

“We get to live our dreams out through a field like this,” said Brandy just before the game began. “We are humbled to have his name on this field. He would be excited to see you guys play.” A member of the Baseball Hall of Fame, Halladay pitched for the Jays from 1998 to 2009 before joining the Philadelphia Phillies for the final four years of his pro career. Halladay died in a plane crash in November of 2017.

Mayor Tory said he hopes Roy Halladay Field will be one of many more accessible sports facilities in Toronto.

“We don’t spend as much time as we might to fully include those with differing abilities and to include them in the joys sports brings to all of us,” he said in his speech.

“Roy’s interest and extraordinary caring to the people of this city stands as a testament to his character. He was all about hard work and caring. This is a place where we can continue to champion youth, and recreation and sports. Being inclusive in sports makes our city stronger.”

While with the Jays, Roy and Brandy started a program in which they helped kids in hospital and other youngsters facing challenges to attend games. Eventually this resulted in the creation of Doc’s Box at the SkyDome (now Rogers Centre). The tradition of Doc’s Box continues to this day at Jays games, and the home dugout at Roy Halladay Field is named Doc’s Box.

Brandy said the program was one that was always of great importance to the Halladay family. “The City of Toronto is so special to our family,” she said. “There were so many fans we met through Doc’s Box and that really taught us the importance of giving back. I’m so proud of the Blue Jays that they continued Doc’s Box.”

For more info on Jays Care and Challenger Baseball, please go to https://www.mlb.com/bluejays/community/jays-care/challenger-baseball