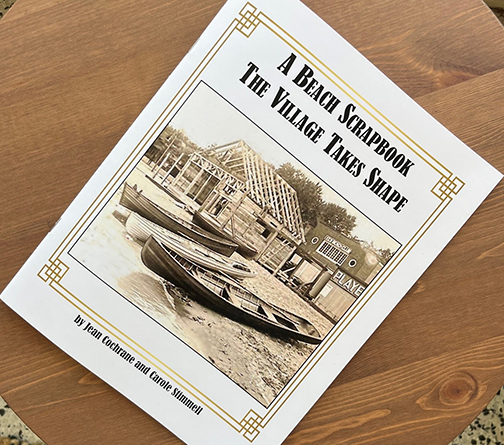 Free copies of A Beach Scrapbook The Village Takes Shape, by Jean Cochrane and Carole Stimmell, can be picked up at a number of locations in the community including Beach Metro Community News at 2196 Gerrard St. E.

Local history buffs can learn more about how the Beach community came to be in a recently released publication that is available for free.

A Beach Scrapbook The Village Takes Shape, by Jean Cochrane and Carole Stimmell, can be picked up at a number of locations in the community including Beach Metro Community News at 2196 Gerrard St. E.

The booklet was created with the support of Community Centre 55.

The 34-page, soft-cover booklet, looks at how development came to the Beach area in the early 1900s and how the current community with its street layouts, parks and housing styles came to be created.

“Between the 1910s and the 1940s, the Beach experienced wide-ranging changes, as now familiar landmarks and brand new neighbourhoods were put in place,” reads the booklet’s opening paragraph.

“After the turn of the century, it was a cozy village and summer resort, but in the two decades after World War I, the area would see its political and civic boundaries modified, the end of the thrill-a-minute amusement parks, the breakup of old estates, better transit, and the gradual disappearance of the summer tourist hotels and boarding houses.”

The booklet is full of numerous historical photos showing such areas as Kew Gardens, the Scarboro Beach Amusement Park, the Glen Stewart Ravine, and the Leuty Lifeguard Station.

Both Stimmell and Cochrane have long connections with the Beach community.

Cochrane and her late husband Glenn were the authors of The Beach: An Illustrated History from the Lake to Kingston Road.

Stimmell  was the long-time editor of Beach Metro Community News, serving in the role for 16 years.

Both Cochrane and Stimmell have also been honoured as Beach Citizens of the Year. Stimmell in 2014 and Cochrane in 2009.