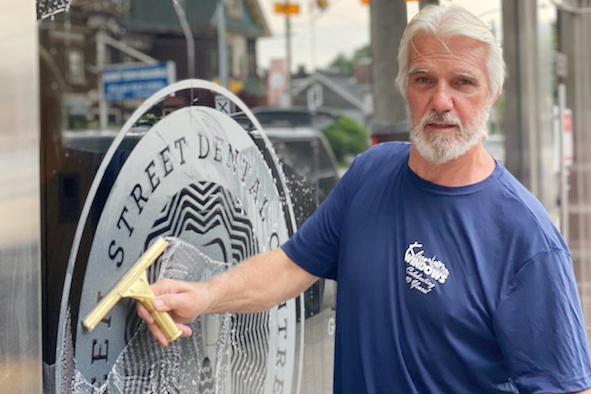 Bill Whyte has been running Kleen Windows in the East Toronto area since 1982. As the business celebrates its 40th anniversary, Whyte said building relationships with customers has been a key reason for the success and longevity of Kleen Windows. Photo: Submitted.

Bill Whyte, founder and owner of Kleen Windows, has been successful in cleaning windows by building relationships with customers, working for fair prices and getting the job done well for the past 40 years in East Toronto.

In 1982, Whyte said he doing window cleaning and similar work for a friend and then realized that he could and should start his own business.

He had to start from scratch. But as he worked and grew his business Whyte found some of his own specialty niches, including washing windows for real estate agents who were staging houses.

“When I started, I was going door to door actually. I had some business cards printed up. I’d go into stores and tell them what I could do, at what price and I picked up a few stores that way,” said Whyte.

“Gradually I got into doing houses and commercial. We do a lot of restaurants and things like that. I do a lot of houses for real estate agents as well, and I work for the general public. Anybody who calls, I’m going to give them an estimate, we’re going to try and work out a job for them.”

Whyte has operated his business in a way that responds to the needs of the customers and the demand in the area.

“I kept it small so it was very manageable. Even to this day, on average, we’ll have maybe five to 10 employees and two crews, sometimes three crews. It depends on the workload,” he said.

“But obviously, we’re doing windows and we have ladders. So we’re at people’s houses, by default we end up getting the job to clean the eavestrough as well. We’ve also gone into doing some power washing of decks and siding and things like that.”

Whyte prioritizes the satisfaction of his local customers as very important. He uses a pricing system meant to be fair and is focused on doing the job of window cleaning effectively, professionally and in a friendly manner.

“Very, very important, and we treat them all with respect and with integrity,” he said of his customers. “A lot of them are the mainstay of our business, really, because we do a lot of work in the Beach. And most of them, they really like us once they get to know us.”

Whyte expressed his gratitude to the loyal clients he has, and said many have gone from customer to friend.

“I’d like to thank all of the people who’ve supported our business and who we’ve gotten to know. We have an ongoing relationship with them all, to the point where some of them just call us up and say, I need the cleaning done. They’re not even asking prices because they know our pricing policy is 100 per cent fair … And I would like to thank them all from the bottom of my heart,” said Whyte.

“They’ve done wonders for us. They’ve really helped our business. And we’ve built some good friendships and relationships from that.”

To celebrate their 40th anniversary in the community, Kleen Windows will be offering a discount of $40 off services to clean residential building windows until Aug. 31, 2022 for those who mention the year “1982” when they book an appointment.