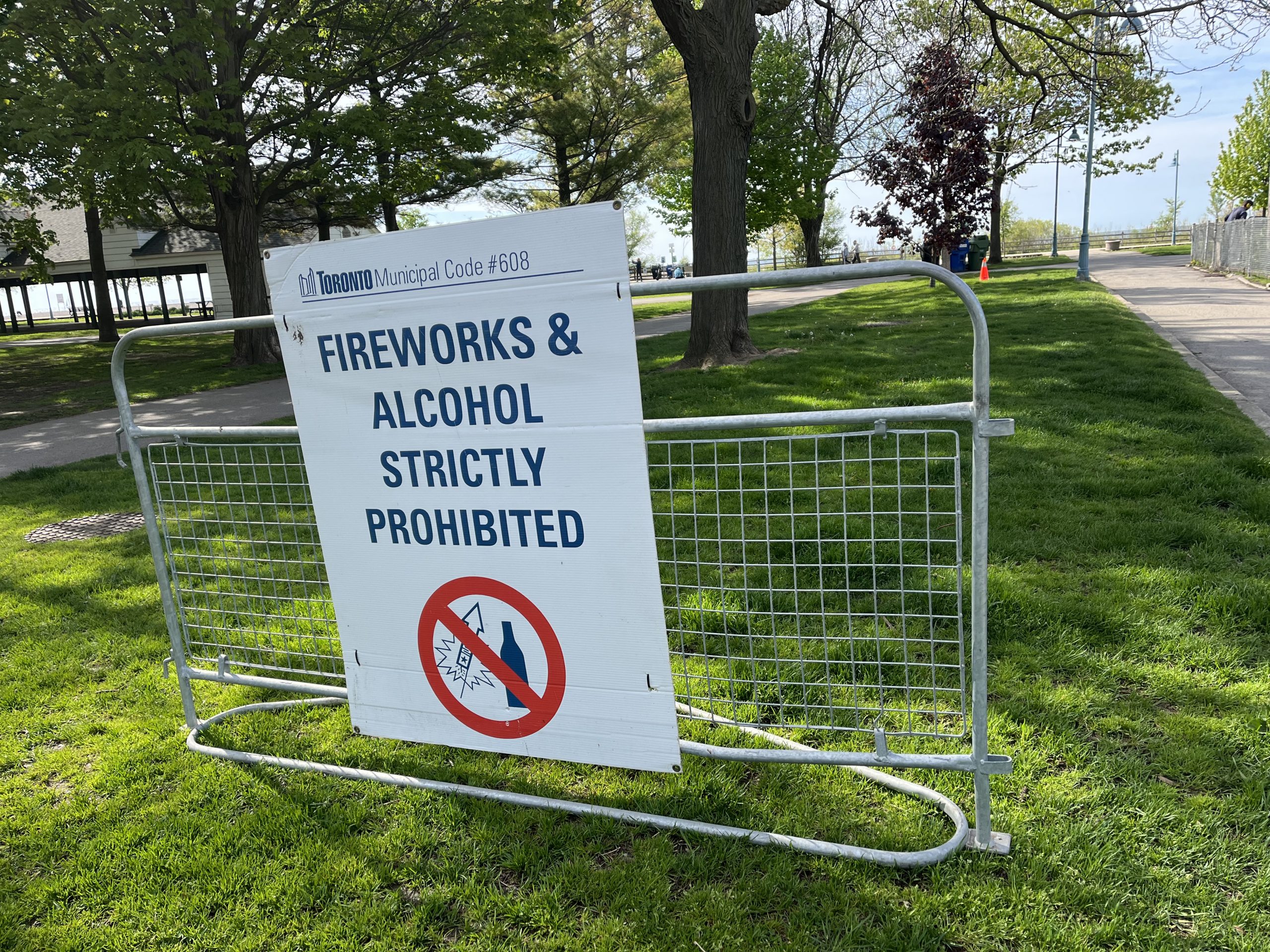 A sign near the Boardwalk reminds visitors that fireworks and alcohol are not permitted in City of Toronto parks or beaches.

With the Canada Day long weekend approaching, many in the community are worried about a repeat of the violent behaviour among large crowds in the Woodbine Beach area that took place over the Victoria Day long weekend in May.

In particular, there are fears of more mayhem regarding the shooting of fireworks at people and buildings among large groups of young people who flooded into the area on the night of Sunday, May 22, after being encouraged to do so by social media posts.

Beaches-East York Councillor Brad Bradford told Beach Metro News late last week that he has heard those community concerns, especially from residents who felt the Toronto Police Service did not have proper resources available to deal with the situation on the night of May 22.

“I believe this opportunity points to the need for everyone to take a serious look at the planning and most importantly, at the allocation of resources for long weekends and big events,” he said.

A meeting in the Pleasantville neighbourhood, just east of Woodbine Park and north of Woodbine Beach Park, that was attended by local residents, police officers and members of the local Neighbourhood Watch on June 16 discussed many of the fears and concerns being felt by residents in the area.

“I’m in agreement with the officers at the Pleasantville community meeting who mentioned an adequate contingency plan is needed,” said Bradford. “Again, with a proper plan in place on how to allocate resources properly, we’ll see a lot of improvement on this front.”

There’s a lot going on in the Beach this Canada Day long weekend. The statutory holiday is on Friday, July 1, meaning the long weekend goes from this Friday through to Sunday.

Also on July 1, the Q107 Canada Day Picnic takes place in Woodbine Park from noon until dusk. And on Saturday, July 2, and Sunday, July 3, the 34th annual Beaches International Jazz Festival kicks off with Salsa on the Beach in Woodbine Park.

These are all large events that will lots of people to the area, and require planning to deal with crowds.

Bradford pointed out that at the Victoria Day fireworks display put on by the city on Monday, May 23, there were large crowds but sufficient police and other resources to keep things running smoothly and safely. That was not the case on May 22, and the result was seven police officers injured, a shooting, a stabbing and numerous arrests.

“On the city side, my office continues to call and help with coordinating a proactive plan to address the concerning behaviour we saw over the Victoria Day long weekend,” said Bradford.

“That said, I’ll continue to advocate for the significant and elevated safety measures from Toronto police and city divisions that keep everyone safe.”

On the afternoon of Tuesday, June 28, Toronto police issued a news release outlining their plans for the Canada Day long weekend in the Ashbridges Bay Park, Woodbine Beach, Woodbine Park areas and along the Boardwalk in the Beach.

“A policing plan is in place over the weekend, with public safety at the forefront, including the day before and following the event (the Canada Day fireworks display at Ashbridges Bay). A variety of police resources will be in the area to ensure everyone can enjoy the event and weekend safely,” police said in the news release.

Police also reminded people that the use of personal fireworks in City of Toronto parks and on the beaches are prohibited.

“Drivers can expect traffic delays due to road closures in the area, including Lakeshore Boulevard East. Parking enforcement will be heightened in the area due to limited parking. Motorists are advised to avoid the area and to use alternate modes of transportation,” police said.

Some residents have been suggesting that cancelling the city’s fireworks displays at Ashbridges Bay would be a step in the right direction to reducing the incidents of violence in the area, but not everyone agrees with that approach.

“I appreciate the concerns from folks on both end of the discussion and also acknowledge the many folks who expressed their continued support and favour for the fireworks displays,” said Bradford. “It’s important to clarify that the concerning events we saw over the long weekend can largely be tracked back to last-minute unregulated events being shared and rallied over social media.”

Others are also calling for the City of Toronto to just ban outright the possession, sale and use of fireworks by members of the public. As it stands now, the city’s bylaw bans the use of private fireworks on public property. However, it is not illegal to possess fireworks while walking through a park or along a beach, only to light them off. Only on Victoria Day and Canada Day are residents allowed to light fireworks on their own private property.

Bradford said he recently supported a motion at Toronto Council to look into the feasibility of restrictions on the retail sale and public use of consumer fireworks.

“The motion also includes a recommendation that city staff request the Province of Ontario to implement amendments to the Ontario Fire Code to effectively regulate consumer fireworks, thus enhancing public safety and enabling a more effective enforcement framework for Toronto and beyond.”

In his comments to Beach Metro Community News, Bradford also addressed what seems to be a growing loss of faith in the ability of police to protect people and property among some local residents.

“Strong relationships of mutual trust between our community and police are critical to maintaining public safety,” he said. “Police rely just as much on the cooperation of community members to provide information about issues in our neighbourhoods, and to work with them to develop solutions to problems. Similarly, community engagement is built upon trust and rapport.”

Bradford stressed that the vast majority of those enjoying Woodbine Beach and surrounding areas do so in a peaceful and positive manner.

“Thousands of people visit the Beach over the summer months – enjoying picnics, family celebrations, or a stroll with an ice cream along the Boardwalk. We won’t let the behaviour of a select irresponsible few prevent the community and visitors from enjoying their time out in this special corner of the city.”