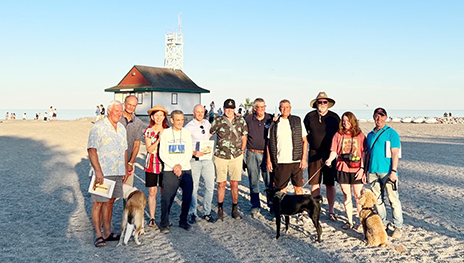 A beach party was held last Friday, June 24, to celebrate the 100th anniversary of the Leuty Lifeguard Station. Photo by Erin Horrocks-Pope.

As Beachers, we find pride in the physical, picturesque community we live in; filled with iconic landmarks, diverse architecture, and beautiful natural spaces – but more than anything else, our community is what we create here through our neighbours, friends, and family.

On the night of Friday, June 24, our community came together on the Beach to celebrate the legacy of one of our most treasured landmarks, the Leuty Lifeguard Station.

Live performances by collaborating local bands, Sons of Beaches and Sugar Rush, set the mood for an evening of dancing, laughing and telling the tales of our timeless beauty that is Leuty.

Displayed photographs of the station taken by local celebrity photographer Erwin Buck, contrasted with historical images and documents from our local historian Gene Domagala, offered a further glimpse into what Leuty means to our community.

“Tonight’s celebration is also a reunion,” Visconti said, not only referring to the generations of lifeguards in attendance, but all of the people that came out to bond, share, and learn more about the history of the Leuty.

“People have needed a chance to get out and be together,” she continued. “So to be able to bring everyone together to honour the station makes me so happy.”

While the 100-year anniversary was technically two years ago, celebrations were postponed due to Covid-19 restrictions at the time, though a small ceremony was held in 2020 to erect a historical plaque commemorating the building of the station in 1920.

As a life-long Beacher, I have countless memories of growing up fixated by this jewel in the sand. But while attending the 100-year anniversary for our beloved Leuty. I learned that these memories are not only my own.

People of all ages attended tonight’s event, all with their own stories and memories that took place around the now over a century old lifeguard station. From tales of pranks lifeguards would play on each other over the generations, to acknowledging more than 6,000 lives that have been saved over the years, tonight’s event celebrated everything Leuty is, has been, and represents.

“Leuty is the Beaches,” said Bradford. “Everyone has their own special memories of being down here and that’s really what makes this celebration historical.”

Hi Bruce,
Here’s the link to the column now up on the Beach Metro Community News website:
https://beachmetro.com/2022/08/30/in-my-opinion-local-democracy-continues-to-be-weakened-in-toronto/

Hello, can anyone tell me the history of the Leuty Lifeguard Station please. I may have long lost relatives in Toronto! I’m from East Yorkshire, England. I’ve been to Toronto but never knew about this. Your help would be most appreciated. Thank you – Ann Leuty

Hi Ann,
Here’s a very little bit of history from a comment that appeared after this story ( https://beachmetro.com/2012/04/17/walk-storied-lee-avenue/ ): “Walter Sutherland Lee was my 3rd great uncle. The next street over was named after his wife, Emma Mary Leuty, as was the life saving station. Lesser known is the origin of Violet Ave. between Lee and Leuty.” Hope this helps a bit and that others might also have some info for you.