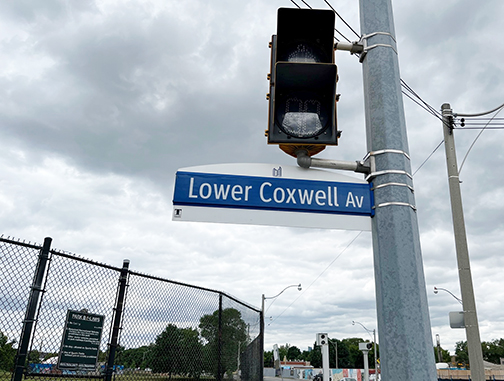 Toronto-Danforth Councillor Paula Fletcher will be putting a motion before Toronto and East York Community Council on June 29 to change the name of Lower Coxwell Avenue to Emdaabiimok Avenue in honour of the area's Indigenous history.

Toronto-Danforth Councillor Paula Fletcher will be putting a motion before Toronto and East York Community Council on June 29 to change the name of Lower Coxwell Avenue to Emdaabiimok Avenue.

The portion of the road to see its name changed is between Lake Shore Boulevard East and Queen Street East. Fletcher said there has long been support in the community for a road in the area to be named in honour of Indigenous peoples.

She said Lower Coxwell was only formerly adopted as the road’s name in 2019 in order to meet the need for a parking lot to have an official address. In her newsletter, Fletcher said the section of road leading to the lake has connections to the Indigenous community. “The area was traditionally used by Indigenous people to travel down to the lake. The name,

Emdaabiimok [Em-dah-bee-muck] Avenue, was derived from its literal translation, ‘where the road goes to the water’ and was recommended by the Mississaugas of the Credit First Nation after extensive consultation,” said Fletcher.

However, she said city staff have recommended against this renaming on a technicality, “specifically” that the street has been renamed within the last 10 years.

She is urging those in favour of the name change to visit her online petition at https://www.councillorpaulafletcher.ca/renaming or send an email directly to community council at teycc@toronto.ca

“Though naming streets, parks, buildings and assets is a small gesture and it does not fulfill the deeper need for reconciliation as outlined in the City’s Reconciliation Action Plan. This proposal is a recognition of the rich Indigenous history in Toronto Danforth and beyond,” she said.

Ironic, given that the Beach Metro News apparently has difficulty spelling the name, getting it wrong in the headline and once (out of two occurrences) in the story.

Indeed we did spell the name wrong in the original headline and first reference in this story. Thanks for pointing it out, and we have now spelled it correctly in both the story and headline.

Opposed. It is good to honour names of historical figures, but street names should not be difficult to read, spell or pronounce. Very important that emergency personnel not be delayed because of uncertainty of street locations.

difficult to read, spell or pronounce for white people you mean?