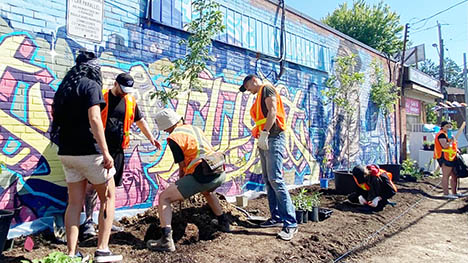 Old’s Cool General Store, at the intersection of Lumsden and Westlake avenues, has been “making consciousness convenient” since opening in May 2015 by co-owners Zahra Dhanani and Mariko Nguyen as a safe and welcoming space in which they could facilitate the creation of a social justice-based community in Toronto’s east end.

Since opening the shop, tucked into a residential community surrounded by schools, senior’s buildings, low-income apartments and working-class homes, Old’s Cool has gained a large following throughout and beyond the city based on their social justice and equity initiatives along with building a close-knit community of activists and allies in the east.

“We didn’t open Old’s Cool here because it would be profitable,” said Dhanani. “We chose this location because of the community – to really be part of it, grow with it and do our part to support it.”

Beyond selling basic home needs such as snacks, pantry and household items, the interior of Old’s Cool is a treasure-trove of books, gifts, artisanal products, jewellery, food and much more, all from local creators with a focus on representation and supporting QTBIPOC (queer, trans, Black, Indigenous, People of Colour) entrepreneurs.

Over the years, the corner on which Old’s Cool sits has become a vibrant beacon of neighbourly love and hope. With the support of their patrons, Old’s Cool runs a community fridge, a little free library filled with diverse books, and a personal care item bank that are all open to the public to use as needed.

To further transform this magical corner, Dhanani and Nguyen recently partnered with Depave Paradise, to convert the “depressing” concrete on the Lumsden Avenue exterior wall into a space filled with indigenous, pollinating and food providing plants – the Gathering Garden. “We really want that corner of the neighbourhood to be a meeting and gathering place,” Dhanani said.

“The whole philosophy of community is also rooted in the appreciation of natural organic relationships, which includes the earth, so it was very symbolic for us to be able to remove layers of concrete and asphalt and replace it with something alive and growing.”

René Fan, a project manager with GreenForceTO and RAINscapeTO, played a key role in facilitating the Old’s Cool de-pavement partnership. She said she hopes this venture inspires more business and property owners to take part in the Depave Paradise program.

According to Fan, “green is so much better,” and the benefits of replacing unused pavement areas with living green spaces go beyond the aesthetic gratification nature provides us with.

“Removing unnecessary pavement creates a possibility of restoring the environment by creating wildlife habitats by planting native trees and plants that attract birds, butterflies and all types of beneficial insects, including pollinators,” said Fan.

Fan further explained one of her favourite aspects of green initiatives such as the Depave Paradise program is the community that builds around the projects when volunteers and area residents take pride in the space and become stewards of these gardens.

During the planting ceremony on June 11, Dhanani spoke with a local mother who brought her young son for that very reason of instilling a sense of ownership and responsibility for the environment for him.

“Now every time he walks past Old’s Cool he can say ‘I did that. I planted that,’ and that’s why we did this,” said Dhanani. “We want our neighbours to see this garden as their own, because it is all of ours.”

To learn more about these programs or transforming your unused paved spaces back into living and lush green habitats, visit www.depaveparadise.ca or www.rainscapeto.ca