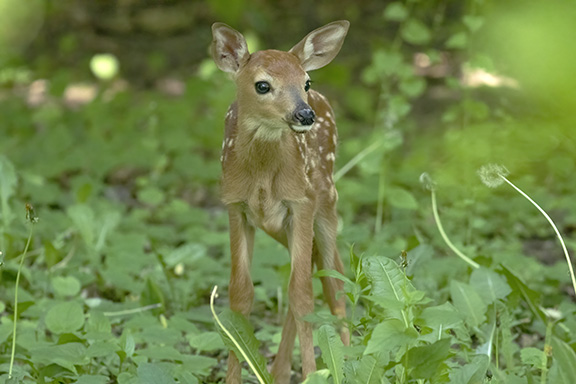 A recently born fawn gets its footing near the Scarborough Bluffs. Inset photo shows the mother doe and three fawns born in a Scarborough backyard. On The Wild Side columnist and photographer Ann Brokelman was lucky enough to be able to see the special moment. Photos by Ann Brokelman.

I’ve said, over and over again, that I don’t think luck has anything to do with all of my animal sightings. I’ve always thought that, since I just spend so much time outside walking around, it’s inevitable that I see a lot of fascinating animals.

However, after what happened on a recent day, I finally must admit that I may have a bit of extra luck on my side.

My husband woke me up saying there was a pregnant deer in our neighbour’s yard. I went to have a look for myself and, sure enough, a doe was out there, and she had an extremely large belly.

This is the season for fawns to be born, so this isn’t abnormal, but to my amazement I could actually see her belly moving and realized she was going to give birth in the next few days, or even the next few hours.

A little, (Ok, big!) part of me was hoping she was going to give birth in my yard. However, the doe jumped the fence a few minutes later and started heading west to my friends Cathy and Josh’s house. I walked over there, told them what was in their backyard, and we all watched the deer a little longer together.

They were happy, to let an animal eat their tulips. When I went back home, I made sure to set up my trail cam and to make sure it was recording properly, just in case the deer made its way back to my place.

A few days later, I got a call from a neighbour Richard on my other side to tell me the deer was having a baby in the backyard! I grabbed my phone and camera and very slowly and carefully went outside. The last thing I’d ever want to do is spook the deer mid-birth.

I hid behind my shed, only just peeking around its corner, saw the deer, and felt my jaw hit the ground: triplets! This was, I assumed, a once in a lifetime opportunity, so I crossed the yard, crept along the fence, keeping our trees between me and the doe, and then slowly walked over to the treehouse my husband built for the kids. Now, to be clear, this is a treehouse built 38 years for little kids, not grandmas like me, but I would have climbed a tree if I had to this day! I made it up the ladder, through the trap door designed for a 10-year-old and lay on my belly with an amazing view of the new family. Two of the fawns were already moving around quite well, doing a bit of playing, and already starting to investigate the yard. One, however, was having trouble walking and nursing. Triplets are uncommon with deer, and surviving triplets even less so.

(Deer usually have twins, so single births are also somewhat rare). The two stronger fawns had no trouble suckling, which made me feel confident for their chances. In their first few days, getting colostrum from the mother will be one of the most important components of the fawns’ survival. It is full of all the energy, vitamins, proteins, and laxatives to get the newborns’ intestinal tracts working, while also containing the antibodies to the diseases that the doe had been exposed to or vaccinated against.

After a while, the doe and fawns started to move towards the front of the yard. The progress was slow as the fawns were continuously running back to nurse, but they eventually went around the side of the house; I was then able to scramble out of the treehouse and head to my front windows.

Erle was already looking out through the front door, and we watched the mom and fawns come out. First came the doe, then the two stronger fawns, and finally the tiniest, and constantly bleating, third. They were no more than an hour and a half old at this point and would only weigh around four pounds. Disney sure did a great job when they animated Bambi’s wobbly legs.

The family crossed the road, and the littlest one had trouble even getting up and over the curb; it fell trying to get up and started crying for its mother. Don’t worry though, deer reader, the mom came back, encouraged it to get up, and thereafter, for some reason, the fawn seemed to finally be getting stronger. It did get tired again, and tried to lay down in a flower patch, but the doe came back to pushed it to keep up with the rest of the new family. As they walked out of sight, I honestly believed that all three fawns would be strong enough to have a chance.

This was such a precious sighting; it was unlike anything I’ve experienced before. I was almost in tears a few times worrying about, rooting for, and cheering on the littlest one.

While the experience showed me so much about the first hours of a fawn’s life, I also found myself with a bunch of new questions I wanted to be answered.

After the deer had moved on, I called my friend Gail Lenters, founder and board president from Shades of Hope wildlife refuge. In response to my inquiries, she told me that it was normal for deer to change locations shortly after giving birth. Predation is a huge risk for the newborns, so it’s important for the mother and fawns to get away from the birthing spot. They will regularly head deeper into the woods, or in my case: into the Scarborough Bluffs area.

Gail also told me that fawns produce no scent for their first week or so, making it much easier for the doe to hide them. It won’t be long, though, until humans, especially cars, become a significant threat to their lives as well.

Since the fawns were born, I have seen the mom on my night cam, and my neighbour has seen her sleeping in his backyard. Today I saw the doe across the road; She looks good and was eating plants and leaves all up and down the street. I haven’t seen the fawns again, but that’s normal and nothing to worry about. They should be well hidden.

So how do I rate this moment? Along with the nesting eastern screech owls in my backyard, this experience was one of the two most special, and luckiest, wildlife moments in my life.

Pretty cool to witness this….but unfortunately this is also Coyote territory…and mom may have trouble protecting all 3.
Good Luck to her..and the kids.

Yes But to be honest the higher concern about people chasing fawn (which I saw) and cars.

Coyotes and foxes will help themselves if they find one injured or dead on road.

It is a blessing to live by the ravine and bluffs.

Unfortuately, as with human kind, some young are born sick or weak and do not survive. Young animals are in danger from predators from their moment of birth. Thank goodness, a female of any mammal , is willing to fight to protect their young, sometimes even from the males in their own species. Unfortunately, living close to mankind and their machines, causes the demise of wild animals, young and old alike. They are lucky that humans often help them when they are in danger, like this compassionate man in the video. Thank God for good people, who try to live in harmony with wildlife.

Thank you for your comments

Another wonderful article, Ann! We are so fortunate to enjoy wildlife in the city.