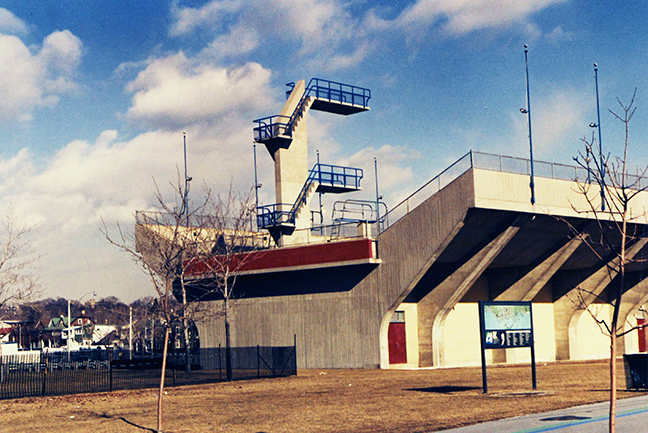 This file shot taken by local resident John Leslie Harrison, shows the exterior of the Donald D. Summerville Olympic Pools at the foot of Woodbine Avenue in the late 1980s.

Only one of the two pools at the Donald D. Summerville Olympic Pools in the Beach is expected to be open this summer.

The 50-metre pool will not be able to open this summer due to damage discovered in the liner.

Similar damage was also discovered in the liner of the 25-metre pool, but it is expected to be able to open by the end of July once repairs are made.

A report by the City of Toronto brought the issues to the attention of Toronto Council this week.

The report indicated that the damage to the pool liners was caused by severe weather conditions earlier in the year, and were discovered as work was being done to prepare to open them this month.

Located at the foot of Woodbine Avenue by the lake, the Donald B. Summerville pools building has been a landmark in the Beach community since it was built in the 1960s.

A report by the City of Toronto brought the issue to the attention of Toronto Council this week.

“To ensure the facility is able to open for the 2022 season, staff are expediting an emergency liner replacement for the 25-metre pool,” said a city press release.

The city added that the repairs to the 50-metre pool cannot be made in time for the pool to open this summer.

Beaches-East York Councillor Brad Bradford introduced an urgent motion at the Toronto Council meeting this week seeking more information from the city’s General Manager, Parks, Forestry and Recreation on the problems with the liners at the Summerville pools.

His motion asked that Council be told “the date and manner through which the need for these repairs were identified; an overview of steps taken in order to both rectify the issue and mitigate the impacts on recreation users; and the expected date on which the pool will be made open to the public this year.”

Bradford said the Summerville facility is “a vital community resource for both residents of Beaches-East York and visitors to Woodbine Beach seeking outdoor recreation and reprieve from the heat during the summer months.”

It was only brought to his attention on June 15 that the Summerville pools would not be opening this month, and Bradford was frustrated that councilors and the community had not been given earlier notice of the problem.

“It’s incredibly concerning to be informed of these issues less than one week prior to the expected opening of the pool and more information is required by residents who both utilize these facilities and will be negatively impacted by these events,” said Bradford in his motion.

Glen Ames pool will also be closed all this summer for renovations. Is there any chance to keep Glen Ames open until Summerville is ready? Furthermore will the renovations in the Olympic pool take place next summer or next spring in order to be ready for the summer 2023? Please add these questions the urgent motion. Please give the outcome of the motion as a follow up.