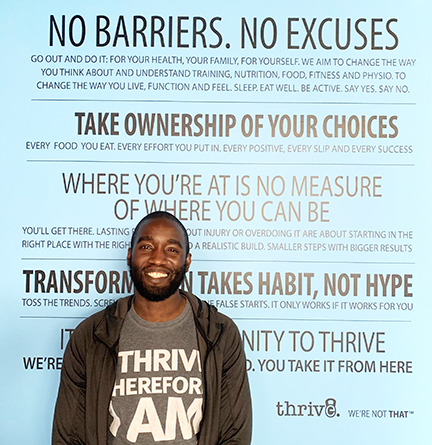 Brian Kotoka is the owner of Thrive fitness studio on Queen Street East in the Beach. Photo by Mimi Liliefeldt.

May 25, 2022 marked the two-year anniversary of George Floyd’s murder. Anniversaries are often a time to reflect and take stock of how far we’ve come.

Having said that, George Floyd’s legacy has shown us that progress can look like the tides. Outrage and impassioned pleas for justice rushed in after his murder, but after a few months the protests were done, the books were read, and complacency allowed our dedication to recede.

Over the course of the last two years, the waves of interest continued their rhythm, in keeping with the news cycle. But the surge of protests and justice-driven action has never quite regained the momentum it initially garnered. The stop start of this kind of movement can be frustrating, but the hope is that we keep starting up to gain more ground each time.

Brian Kotoka is someone who not only spent the first part of his career stopping and starting over, but has also felt the impact of living in a racially unbalanced society. Brian is a personal trainer and the owner of Thrive, a semiprivate fitness studio on Queen Street East, just east of Munro Park Avenue.

Brian’s parents moved to Canada from Ghana in the early 1980s. His dad left because it was a dangerous situation. “My mom tried to leave with him, but they couldn’t make it work so my dad came first. My mom too, eventually had to leave my two older sisters behind to be cared for by the village,” said Brian.

A year after his mom’s arrival in Canada, Brian was born in Toronto in 1986, and his sisters joined them a couple of years later.

As a family they moved around the city, but Brian’s formative years were spent growing up in Flemingdon Park.

“I was introverted and had some tough times growing up. I was bullied and I had to fight my way through. When I had my growth spurt, I became the aggressor as a way of keeping myself safe,” Brian told me. “I had to keep my chest puffed up so no one would be coming at me. It worked but it took a lot of energy.”

Brian was excited to make the change to high school and leave his bullying days behind him. “I tried picking a school where I wouldn’t know anyone. I was tired of keeping up the appearance of the tough guy.”

A few years into high school his family moved to Regent Park, said Brian. “I saw things I’d never seen before, gang violence and drug abuse. We were downtown and it was a big adjustment.”

High school is one of many steps to figuring out who we are as young adults. Brian realized he was an independent thinker, which made falling into line with standard ways of thinking difficult.

“In English class we had to read a book and give our thoughts on it. So, I gave my feedback and the teacher said I was wrong. I challenged her on it saying, ‘If these are my thoughts and what I took away from the book, how can you grade me as wrong?’ We had a back and forth, and when I left the classroom to go to my locker she told the class, ‘That’s someone who’s not going to make it.’”

I asked Brian if the teacher was white and if he wondered if race played a role in her defensive response. He said, “Oh for sure. One hundred and ten per cent. I’ve always been conflicted here because I never want to use that as an excuse, but at the same time I’m not stupid.”

This type of labelling is so common. It’s the work of the unconscious biases we as a society have been fed: Black people are “difficult,” “angry,” aggressive,” “unintelligent,” and this adds up to “dangerous” which, of course, has landed many of us dead, as though our lives are somehow worth less than anyone else’s. George Floyd will forever epitomize the true fear of being a Black man.

As a young man Brian saw a lot of death through his job at the chief coroner’s office. “I read a book about someone who worked at a morgue, and I was really interested. A teacher connected me with an internship at the coroner’s office doing data entry. They trusted me, so I got more responsibility over time. It was really eye opening and life changing,” he told me.

“One of our family friends was murdered by her stepdad and I remember going to the funeral and thinking she didn’t get a chance to have a voice. I thought I could be a voice for the voiceless if I worked in this field (criminology). Being in that environment (the coroner’s office) I felt like I finally had a purpose and a way to serve the community.

“So I did a year and a half of Criminology at UOIT (University of Ontario Institute of Technology) and kept in contact with the coroner’s office. But I realized the career path wouldn’t be as linear as I thought and I also anticipated there wasn’t any chance I would be let in because of where I grew up and what I’d seen.” And so he quit.

Brian ended up working a multitude of different jobs, and around this time he started to exercise more seriously. He was gaining muscle and feeling confident, so he started a website documenting his progress.

“I started going to the library and read about fitness for hours. The books were saying all different things, so I thought I should go to one resource and started looking at kinesiology programs. Being very introverted I didn’t want to work with people, I thought I would make my website and become a famous blogger. I enrolled in the Fitness and Health Promotion Program at Humber College. Halfway through a gym manager came to give us a talk about careers. I spoke with him and he was really impressed with me and said I should come work at his studio. I decided to go and work at the Fitness Institute which was a private club.”

After a nervous start, Brian started to train people and became one of their best trainers and made more money selling personal training than he had ever made in his life up to that point.

“Going back to school after that summer was the hardest part. We had a basic sales test, and I wrote down exactly how I would do it and I failed the test. It was the same method that made me a lot of money at work. I was incensed. The independent thinker in me couldn’t take it. So I left school and went on a mission to become the best coach. I went back to the Fitness Institute working as a full-time coach. I started burning out and cancelling clients, so I decided to travel to learn from others and break the cycle. I invested a lot of money into education and courses trying to force my way better. I didn’t know my worth yet. When I was ready to leave the Fitness Institute, they offered me more money but it was time to move on,” he said.

“I knew I wanted to open up my own studio. I saw the semi-private model in California and I knew it would be coming here. I had plans to open in California but I wanted to test it here. I started consulting for other studios and implementing this model. The last gym I helped we doubled the membership, but I realized I was tired of another goodbye. It’s what made me think maybe it was time to really do this. My partner in California wasn’t feeling confident with us getting started so I started looking here in the Beach as I knew the neighbourhood,” said Brian. “I kept wavering but my business coach gave me the push I needed. When I got this space I only had enough money to get half the floor covered and six kettlebells.”

They opened in June 2014 and haven’t looked back. Though they had their ups and downs learning how to run a business, it was satisfying to finally have chosen a path that felt authentic.

“We had to figure out who we were and that we’re not like everyone else. We want to create meaningful impact on people’s lives. We empower and offer autonomy to our clients,” said Brian, and in this way he has fulfilled his desire to serve his community.

It might not be in the way that he envisioned when he was younger, but Brian appreciates how his life could have turned out very differently based on how it started. He credits his parents for providing him and his three sisters a stable loving home. His parents were forthright with them and never shielded them from the world’s ugly truths, but they also showed him what was possible with love and determination.

When I asked Brian if he was hopeful for the future of anti-racism he paused and said, “That’s hard. I’m not quite hopeful, but I’m optimistic. The world is so flawed. I feel like there was a spotlight (on racism), that the entire world was coming together and asking the tough questions and now I feel like we’re just moving on…”

I feel what Brian is saying, too. I know it’s an issue that people want to care about but don’t always have the time or the headspace, but the truth of the matter is we need all of us to participate and speak up. We need the full force of our humanity, to make lasting change. Though we will never forget, we don’t want anymore anniversaries.