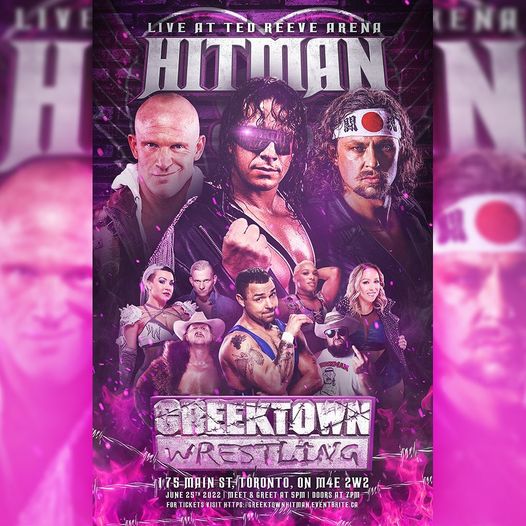 The Hitman and Greektown Wrestling event is coming to Ted Reeve Arena on Saturday, June 25.

The Hitman and Greektown Wrestling event will feature a meet and greet at 5 p.m. with pro wrestling legend Brett ‘Hitman’ Hart.

Doors open for the wrestling card at 7:30 p.m. Featured matches will include a bout between Taylor Wilde and Lady Frost.

Hart, 64, began his pro wrestling career in 1978 and came to prominence in the 1980s and 1990s with the World Wrestling Federation (WWF now known as WWE).

Sky Sports said his legacy is “one of, if not the greatest, to have ever graced the squared circle.”

Hart is a five-time WWF champion and a was inducted into the WWE Hall of Fame twice – the first time as an individual wrestler and second as a member of The Hart Foundation team.

Tickets to the meet and greet with Hart, which will include a chance to take a photo and have an item signed are $133.63.

For tickets to the event and more information on the meet and greet with Hart, please go to https://www.eventbrite.ca/e/hitman-bret-hart-greektown-wrestling-live-ted-reeve-arena-tickets-347383502407

The June 25 event is presented by Greektown Wrestling which can be found on Facebook at https://www.facebook.com/greektownwrestling/