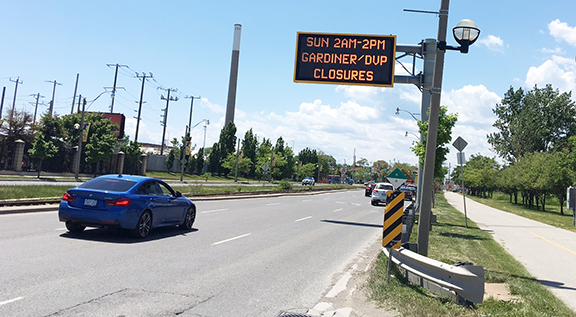 A sign on Lake Shore Boulevard East reminds motorists that the Don Valley Parkway and Gardiner Expressway will be closed on Sunday, June 5.

Traffic in East Toronto could be impacted by the closure of the Don Valley Parkway this weekend for the Baycrest Bike for Brain Health event.

The fundraising bike ride in support of people with dementia takes place on Sunday, June 5.

In an news release, Toronto police said the ride will result in the closure of the Don Valley Parkway between the Gardinder Expressway and York Mills Road beginning at 2 a.m. on June 5.

Also to be closed for the Bike for Brain Health event will be the Gardiner Expressway between the Don Valley Parkway and South Kingsway. There will also be road closures in the area surrounding Exhibition Place, which is where the bike ride begins and ends.

The closures are expected to last until 3 p.m. on June 5.

Due to the extensive road closures, police said motorists can expect significant delays in the downtown core, particularly on arterial roadways.  Alternative routes and public transportation are strongly recommended.

Some of those alternative routes for people seeking to get in and out of downtown when the Don Valley Parkway is closed traditionally include Victoria Park Avenue and Kingston Road in East Toronto. Local residents are reminded to be aware that there could be increased traffic on those roads on June 5.

For more information on the Baycrest Bike for Brain Health, please go to https://bikeforbrainhealth.ca/