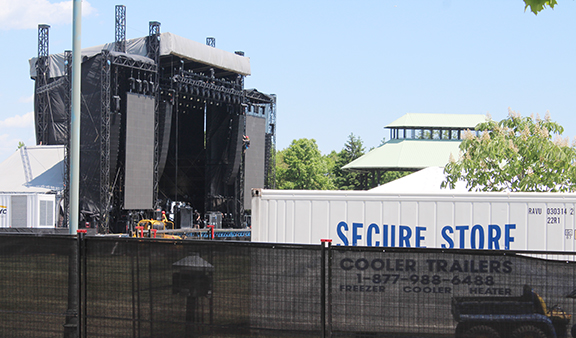 Final preparations were being made at the Woodbine Park concert site earlier today for tonight's (June 3) Rufus Du Sol performance.

Final preparations were being made at the Woodbine Park concert site (northeast corner of Coxwell Avenue and Lake Shore Boulevard East) on the afternoon of Friday, June 3, including rigging of the large stage facing south.

Tonight’s concert will see the park open to attendees starting at 6 p.m. There will be a large general admission area for fans in front of the stage and across the park, with a VIP area as well. The event is licenced with two bars for general admission fans and one for the VIP area.

Tickets for the performance were ranging in price from $220 to more than $690 on the Tickemaster website this afternoon.

The Surrender album was released in October 2021.

Rufus Du Sol’s Surrender Tour sees them performing at a number of venues in North America this month along with tonight’s Woodbine Park show. On June 4, Rufus Du Sol will be in Montreal performing at Park Jean-Drapeau, and then on to Philadelphia on  June 7.