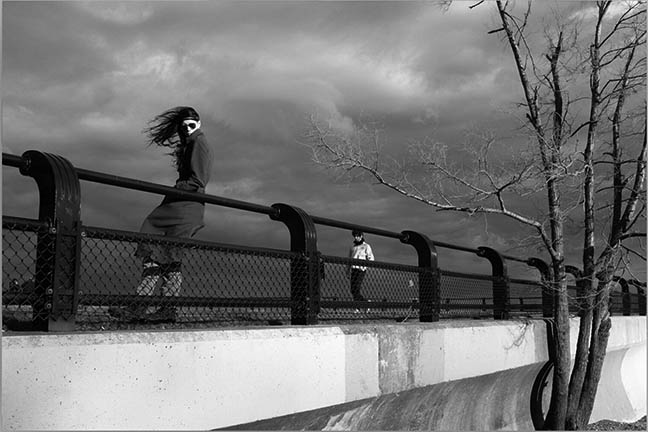 Shot on March 20, 2020, Maria Ricossa describes the photo above as "the wind blows the skies darken and the pandemic arrives". Inset photos feature the cover of her book Shore Stories and photos from the Beach and Lake Ontario that are in it. Photos by Maria Ricossa.

A professional actor. Ricossa said all but two of the photos in the book were taken in the Beach area along the shore of Lake Ontario.

She has combined her love of water and beaches with her passion for photography to create Shore Stories.

“I’ve always been drawn to water and sand since I was a child,” said Ricossa. “The changing nature of the lake. Everyday is a different story with the water and the wind and the sky.”

She has lived in the Beach for 30 years, where she and her husband raised three kids, and spends many days walking along the Boardwalk looking for photography subjects.

Ricossa said she takes “street photography” which are not staged shots but photos of people and things that capture her imagination. Those are the photos that make up Shore Stories.

She said she creates “little dramas on what I see on the beach and what gets my attention.”

Ricossa gave the example of a photo of a girl she spotted walking in off one of the piers while other people sit in the background. “There’s a little girl with a mermaid bathing suit and a big smile on her face coming off the jetty with three families in the background. They could be connected or not,” she said.

Ricossa said the subjects in her photos do not know they are being photographed at the time. They are not staged or set up in advance.

“Most of the time people don’t know that I’m taking a photo. I’m interested in what people are doing when they don’t know they’re being photographed. I’m looking at what makes people human and how they’re living their lives, especially on the beach,” she said. The COVID-19 pandemic was a factor in Ricossa’s creation of the book. She said that many people were coming to the Beach area and the Boardwalk for walks and other activities during the pandemic since there was often little else to do.

“It was an escape during COVID. People were creating their own reality on the sand,” said Ricossa.

While the photos in Shore Stories cover a period of five years, many were taken during the pandemic. “Absolutely during COVID as the nature of the Beach changed then. Different people and more people were coming down and gravitating further east than usual. They were coming to this extraordinary place to relieve their tensions.”

Along with the local photos, the cover of Shore Stories feature a shot from Mexico and there is also another photo from Miami Beach.

The book will be officially launched on June 1.

Shore Stories can be ordered online through here website at http://mariaricossaphotography.com/