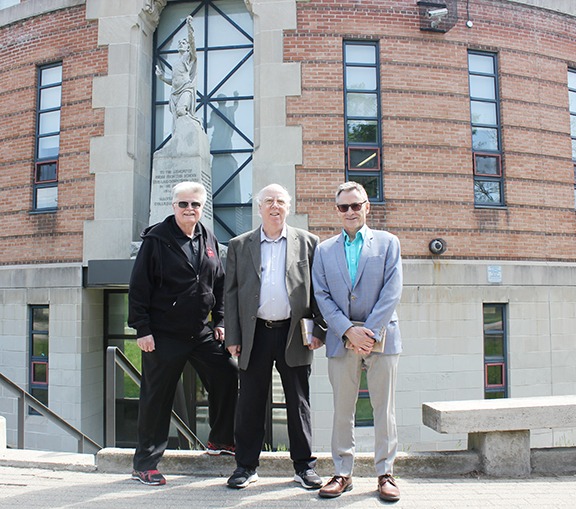 Ken Scullion, David Fuller and Randy Deffett, of the Malvern Red and Black Society, in front of the school's First Word War memorial cenotaph. Inset photos show those attending the ceremony to mark the cenotaph's 100th anniversary on May 24, and the Malvern Collegiate choir which sang at the ceremony. Photos by Josh Sherman.

When community members met at Malvern Collegiate Institute on May 24 to mark the centennial of the school’s cenotaph, they reflected on the First World War memorial’s past — and learned something of its future.

“Today we are here to remember, to rededicate on the 100th anniversary of this cenotaph, but also to ask for your help once again soon in raising the money to complete the repairs,” said historian David Fuller, the keynote speaker at the Tuesday morning ceremony.

The repairs that Fuller referred to stem from repeated acts of vandalism and are proposed alongside plans to bolster security around the local landmark, which is the work of noted artist Emanuel Hahn, who also created the image of the Bluenose schooner on the Canadian dime.

Despite a full restoration in 2011 to the tune of $40,000, the cenotaph — which honours the 25 Malvern students killed in the First World War — has seen better days.

The extensive rehab project a decade ago shored up the statue’s crumbling base, reattached the male figure’s severed right hand, and replaced the sword that had been stolen from it.

Yet hardly a day had passed before the trouble began again — and continued.

“Within 36 hours, some smart guys climbed up and wrapped it in blue hockey tape,” said Fuller, a member of the Malvern Red and Black Society (MRBS) alumni group, which has acted as steward for the cenotaph.

During the brazen act, the hand-carved lead letters of one fallen soldier’s name got scraped off. Then, in 2014, the sword was stolen once again. This time the crime was caught by surveillance camera, but the tape wasn’t good enough to identify the perpetrators.

The MRBS hopes to raise $10,000, which would be split between replacing the sword and lettering and enhancing security. One idea is installing what Fuller calls “interpretive signage” to discourage vandalism by indicating the monument’s importance and meaning to passersby.

“There’s some more practical measures,” he added, noting he’d like to see “rollers” mounted on the ledge of the cenotaph’s platform so it’s harder to grab hold of. “It’s not like it’s barbed wire — although we’ve thought of it, believe me,” he said.

The Toronto District School Board confirmed that the idea of installing rollers had been discussed with the alumni group but that there was an issue. “This was deemed to be unsafe as the rollers could cause someone attempting to climb to fall and hurt themselves possibly leaving us liable,” a spokesperson told Beach Metro Community News in an email. Fundraising hasn’t officially begun, but the MRBS intends to launch the campaign soon and will share more details closer to the date. Fuller recommends checking malverncollegiate.com for updates.

“To all of those who have contributed their time, who have organized to restore the cenotaph, it’s just, I think, a really important way to honour the memory of those from this school who laid down their lives in the First Great War,” said Nathaniel Erskine-Smith, Member of Parliament for Beaches-East York and one of several community leaders to speak at the event.

Asked why the cenotaph has become such a target over the years, Fuller provided a theory: “It’s a school rivalry thing, we think; I don’t want to accuse any school in particular.”

To close out the half-hour ceremony, which about 100 people attended, Malvern’s band and choir recited Amazing Grace and the school’s song, Onward Malvern.

Afterwards, Malvern students reflected on the statue’s significance in 2022.

“To me, it’s a representation of a young person’s courage but also someone was very similar to us now and was faced with extremely different circumstances and how their courage then has led to our freedom or our liberties now,” said Grade 12 student Amina Aved Ali in the library, where a reception was taking place.

Rianna Brown, also Grade 12, had another thought: “I think it’s really important because it’s such a symbol for the school.”