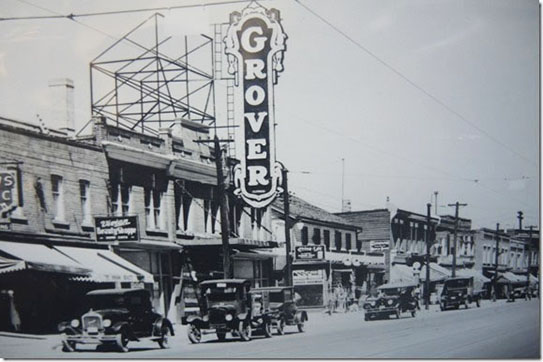 The Grover movie theatre, shown in this City of Toronto Archives photo from the 1920s, was located on Danforth Avenue just east of Main Street. Local historian Gene Domagala hosts a walk of the area on the afternoon of May 21.

On Saturday, May 21, I will be leading an historic walk starting at the northwest corner of Woodbine and Danforth avenues. The walk will begin at 1 p.m.

Even though I have been leading historic walks on the Danforth for more than four decades, the area still intrigues me.

It is one of the oldest streets in the city, and though it changes in many ways it also seems to be the same because of the people who live and work on it.

There have been many articles written about the Danforth. One of the best books I know of is The Danforth in Pictures: A Brief History of The Danforth by noted Beach and public library historian Barb Myrvold.

There are different names for the Danforth. At one time it was going to be called Bloor Street. Danforth Avenue was not really started by Col. Danforth who constructed Kingston Road. That’s a misnomer. In the beginning it was a small country road with market gardens and the odd hotel.

Things really started booming when the Grand Trunk Railroad opened up its biggest freight yard in Ontario at Main Street and Danforth Avenue. People flocked to the area for employment. Streetcars, which were the dominant form of transit in the early 1900s, helped business boom by bringing people to the area.

The Danforth nowadays is often referred to by the nickname of The Danny. The area we will cover in our walk from Woodbine to Dawes Road on May 21, also was known as Cedarvale, Little York and Dawes Corner.

In the old days, one of the horse race tracks in the area hosted the first Queen’s Plate. That track was located near Main and Danforth.

In the early and mid 1900s there were a number of movie houses in the area such as The Prince of Wales, The Grover and The Avalon.

There was also lots of music and entertainment in the local hotels and taverns in the area, but sadly most of those are just history now.

The Danforth and transit in Toronto also share a history. The streetcars eventually disappeared (though the tracks are still under road pavement), replaced by the subway.

When the subway arrived in the 1960s, a different era for the Danforth began. Things changed but the spirit of the people remained. Just lately a new entertainment venue has started on Danforth Avenue, just east of Dawes Road, called The Comedy Bar.

During my historic walk on May 21 you will be able to see where the Empringham Hotel was, and a number of local dairies that are no longer in business. We’ll see the site of one of the oldest hotel buildings in the area, hear some stories of the Danforth, learn a bit about the Massey Harris Estate, and some other interesting people and places.

I look forward to seeing you on the walk.