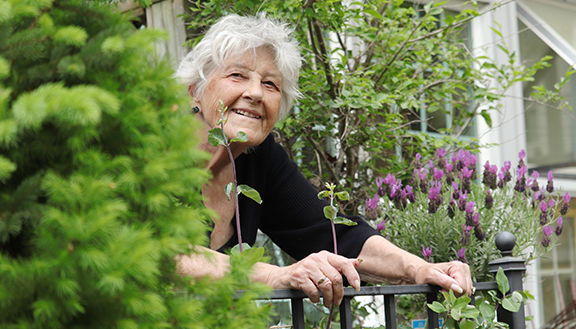 Longtime artist Dianne Shelton was a member of the Beach Studio Tour and an avid dog walker. Photo: Submitted.

Longtime Beach resident Dianne Shelton is being remembered for her art, her involvement in the dog-walking community and her outgoing, friendly personality.

Shelton died last month at the age of 79.

She had been involved with the Beach Studio Tour, which opens the homes and studios of local artists to the community, for more than 25 years and had served as its co-chair for a number of years.

Ruth Hayes got to know Shelton through their connection as artists and dog walkers.

“She was just so wonderful. Everybody loved her. She was a real creative spirit,” said Hayes of Shelton. “She was a very kind and generous person. She was always reaching out to people and always so friendly when she would meet people with her dog. She always loved to hug people.”

Shelton enjoyed meeting people, either through her art and opening her home and studio on the tour or on her dog walks in the Beach, said her longtime partner Asma Khan.

“She knew everybody. People would meet her on the beach walking the dog or at the studio tours,” said Khan.

Shelton was born in the Willowdale area in 1943 and she attended Hollywood Public School and Earl Haig High School.

After high school she took a job as a commercial artist with Crown Life but later moved on to become an “air hostess” with Air Canada in the 1960s. It was at Air Canada where Shelton and Khan met

Shelton worked for Air Canada for 37 years, said Khan, and was always a strong defender of the rights of the women who worked as flight attendants. She played a key role in making sure that women were able to work as pursers (chief flight attendant or air crew manager), which had been a job that only men were allowed to do when she first started with the airline.

“She loved to fly and travel and in the early days they would go on such long flights,” said Khan. “They’d be gone for nine or ten days and go from Toronto to London to Bombay to Singapore.”

Shelton’s paintings have been described as bright and bursting with colour, and Khan said she felt they were inspired or connected to her love of flying on how she saw the world in many ways.

“Her art is about the elevation and overlooking what she saw. I always thought they had a sense of seeing the view from the point of takeoffs and landings,” said Khan.

“She had a very acute sense of colour…Colour was her forte in her paintings,” said Khan.

“She loved every form of art and would always encourage people to take part and get involved in art,” said Khan.

Along with her passion for flying, art and dogs, Shelton also loved living in the Beach (on Fernwood Park Avenue close to the lake for some 40 years) where she could be near the water.
Shelton and Khan would spend many summers in the Wasaga Beach area, which Shelton had a family connection to.

“We spent a lot of time in the summer at Wasaga Beach, and she would do a lot of painting there. Wasaga was a very familiar area to her. Both there and living in the Beach she felt she had to be near water,” said Khan.

A memorial service for Shelton was held on May 11 at St. Aidan’s Anglican Church in the Beach.

She is sadly missed by her many friends, neighbours and family members.

Dianne would make you feel that you knew her all along as she never made you feel like an outsider even when first meeting you.
She loved to know everything about your day to day life and your interests and where you’ve travelled to.
Always interested in good conversations about anything and enjoyed a really good laugh and a hug.
We Love you forever Dianne

Dianne was kind and loving, an amazing artist with such varied styles. I feel blessed to have known her. I will miss her light and her positive energy. She touched everything with her creativity.

Dianne, you were a treasure. Always positive, always generous, always laughing, always a joy to behold, you will be deeply missed.