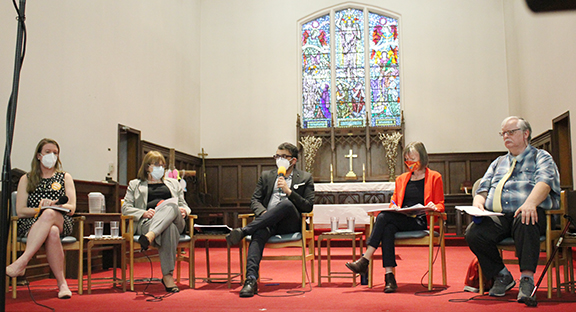 A number of Beaches-East York candidates in the upcoming provincial election took part in the Beaches-East York Interfaith Candidates’ Meeting. The meeting on the night of May 12 was held at East York’s Church of the Resurrection on Woodbine Avenue. Candidates (from left-to-right) are Kate Dupuis, NDP; Angela Kennedy, Progressive Conservative Party; Abhijeet Manay, Green Party; Mary-Margaret McMahon, Liberal Party; and Stephen Roney, of the New Blue Party. Photo by Josh Sherman.

At the Beaches-East York Interfaith Candidates’ Meeting last Thursday evening, local MPP hopefuls shared what their top priorities would be during their first year in office.

The May 12 event — hosted by an informal interfaith group representing several churches as well as the Danforth Islamic Centre and Beach Hebrew Institute — brought five candidates together at East York’s Church of the Resurrection ahead of the June 2 provincial election. To be invited, participants’ parties had to have at least one member in the legislature at dissolution, or candidates in 80 per cent or more of all ridings.Step

Candidates were asked for their inaugural-year plans during the second half of the meeting. They fielded questions from both in-person attendees and 50 or so viewers streaming the meeting on Zoom, with topics ranging from nuclear power to voter fraud.

Angela Kennedy, of the Progressive Conservative Party, said “the mental-health strategy” would be her immediate focus if her campaign is successful.

“People have lost their jobs; we need to be supportive of families who have lost their family members. There are still people who are sick, who have long-COVID symptoms,” explained the long-time Toronto Catholic District School Board trustee. “So, I think that the mental-health and addiction treatments — this is what I would be focusing on.”

Manay, also deputy leader of the party, said before a crowd of about 80 seated in the pews.

The Ontario New Democratic Party’s first act would be to repeal the Doug Ford PC government’s Bill 124, said Kate Dupuis, a new candidate for the party as would-be incumbent Rima Berns-McGown decided not to run for a second term, in part due to “toxic” politics.

Dupuis described the bill as an “under-inflation wage cut on the wages of 1 million public-sector employees,” noting that 55 per cent of these workers are women. “This is a feminist issue.”

Bill 124, introduced in 2019, has been widely criticized by health-care professionals for capping many public-sector wage increases at one per cent annually.

Representing the recently formed New Blue Party, Stephen Roney also took aim at a specific piece of legislation: Bill 67, the Racial Equity in the Education System Act. “The most urgent thing is to make sure that Bill 67 — which got through second reading — is not passed,” he said. “This is the one that imposes critical theory on education at all levels,” he said.

Mary-Margaret McMahon, running under the Liberal Party banner, addressed the cost of living. “Affordability is the number-one thing we’re hearing at the door, life is getting too expensive for people,” said McMahon, who, as a former Beaches-East York councillor of the former Ward 32 is no stranger to the campaign trail.

Candidate priorities largely echoed the main subjects brought up in the meeting’s first hour — although you could say that those were preordained. Preceding roughly 45 minutes of responses to the audience, moderators Jamie Perttula and Patricia Elkerton asked questions spanning four categories, all selected by the interfaith group’s committee.

“We think that it’s a spiritual activity to make decisions on a moral and ethical basis, so we’ve posed questions — on healthcare, on environment, on education, on homelessness — and we’ve asked the candidates to address them,” organizer Michael Van Dusen, a Deacon at St. Aidan’s Anglican Church, told Beach Metro Community News just before the event’s 7 p.m. start.

The questions were framed from a “faith-based” perspective, explained Van Dusen, who spoke further on this in his opening remarks.

“As people of faith, we believe that we have responsibilities to create a more just and equitable world, to care for one another and successive generations, to uphold the dignity of each person, and to protect the environment that we share for our own mutual advantage.”

A debate, this was not. Van Dusen told Beach Metro Community News: “We have asked the [candidates] to address the voters who are represented here… and not attack one another.”

Despite the ground rules, there was the occasional confrontation.

With tens of thousands of households on Toronto Community Housing’s social-housing waitlist, candidates were asked how they would address the overwhelming backlog.

After suggesting that deregulating zoning would be the best way to boost housing supply by making it easier to build homes — thus improving affordability — Roney offered another take, one he clarified wasn’t New Blue policy.

“My own little idea for the emergency of the homeless and the mentally ill is get them out of the city,” he said. “There are a lot of motels out there that are falling into disuse and could be quickly converted, and they’d be much better off in small towns.”

When McMahon’s turn to answer came, she addressed Roney’s comments directly. “I seriously take umbrage with what my seatmate just said about people having to move out of the city and live in motels elsewhere. Everyone has the right to live where they choose to live,” she said to applause.

Better solutions, McMahon suggested, are a Liberal plan to build 1.5 million new homes over 10 years (a promise shared with the NDP and PC parties), a tax on empty dwellings, establishing a provincial corporation to build affordable homes, and unlocking provincial lands.

(Editor’s Note: Due to the format of the meeting, Roney later told Beach Metro Community News, he was unable to explain at the time that he proposed people be offered free accommodation in motels outside the city and he did not suggest that they be coerced by government into moving.)

Dupuis cited the NDP commitment to build 100,000 social-housing units provincewide — if the party remains in power for a decade — while also repairing 250,000 existing ones. “It is imperative that we not only focus on building new but are repairing what is currently broken here in Beaches-East York,” she said.

Manay stressed the importance of housing with mental-health supports, noting the Greens pledge to build 60,000 such units “immediately,” as well as options such as co-op housing. “Cooperation with municipal council needs to be met with funding, it cannot be just words,” he said.

Although Kennedy acknowledged that “we certainly need to increase our supply of housing,” she said a balance needed to be struck in terms of density. Where appropriate, she suggested the PCs would work with landowners to subsidize affordable units.

Overall, the atmosphere remained civil, something candidates and organizers credited with the event’s structure. “We want to raise the level of political discourse,” said Van Dusen.

Some candidates were able to find common ground, too.

“We need to ensure everyone has access to mental-health care. Up to 25 per cent of Ontarians have struggled with their mental health during COVID-19,” said Dupuis. “The NDP will bring mental-health care under the OHIP funding,” she said, noting that as a neuropsychologist, this was personally significant.

Manay agreed with Dupuis’s universal mental-health care pitch—with a playful jab: “Kate, I don’t mean this in a snarky way. I’m glad the NDP read our idea and took it, because we need all parties to follow this in terms of making sure that our progress in this province is kept intact.”