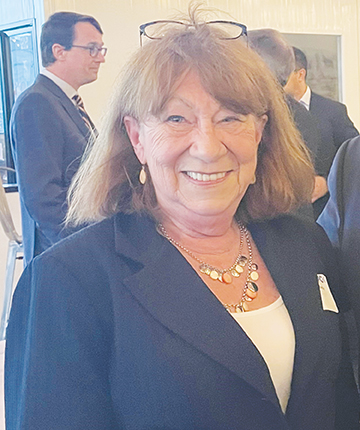 Angela Kennedy will be the Progressive Conservative Party candidate for the riding of Beaches-East York in the upcoming provincial election. Photo; Submitted.

Longtime Toronto Catholic District School Board (TCDSB) Trustee Angela Kennedy will be running for the Progressive Conservatives in the riding of Beaches-East York in the upcoming provincial election.

Kennedy has been a trustee representing the TCDSB’s Ward 11, which includes East York, the Beach and part of North York, for more than 20 years.

She has also worked as a nurse at Michael Garron Hospital (formerly known as Toronto East General Hospital) for more than 50 years.

She said she will be bringing her experience in the education and healthcare fields to Queen’s Park if elected MPP.

“I decided to run because I’m anxious to represent the people I work with every day at the hospital, and I represent as a school trustee. I know this community very well,” said Kennedy.

She has also served as chair and vice-chair of the TCDSB on a number of occasions over the past 20 years, and she is currently the board’s chair.

Though she lives in the North York portion of the board’s Ward 11, Kennedy said she has deep roots in the Beaches-East York riding area.

She grew up in the Beach and attended the former Corpus Christi Catholic Elementary School and then Notre Dame Catholic High School. Working at the hospital at Coxwell and Mortimer avenues has also made her very familiar with the East York area.
Kennedy has run as a candidate for the PC Party provincially in 2003 in Beaches-East York, and also in 2007 and 2011 in the Don Valley East riding.

She said key issues for her this provincial campaign are education and healthcare, both areas in which she is known to be a strong advocate.

“I have a solid background in the education field and as a nurse in healthcare. Along with long-term care, those are both big provincial issues for me,” said Kennedy.

“I have a lot of advocacy experience. I was head of the TEGH local of the nurses’ union (provincial) for 10 years. Then I had kids and moved to advocacy in the school council. I have a lot of experience in both healthcare and education, and people trust me.”

As a Registered Nurse (RN), she said knows the needs in the long-term care system and how they can be best addressed.

“Long-term care is very important. As a nurse I am advocating for more RNs and for people to be able to live in their homes as they age. It is especially important to increase amount of available home care.”

Affordable housing and transit issues, including the impact of planned transit line expansions in the area, are also important issues for her, she said.

Kennedy said her familiarity and experiences dealing with residents from all parts of the Beaches-East York riding gives her a strong understanding of the community as a whole; both its differences and similarities.

“For me everyone is the same, and I advocate for students and patients no matter what. I grew up in the Beach and feel I’m Beacher. I’ve also worked for more than 50 years as a nurse with the hospital so I also feel I’m an East Yorker. I relate to everyone really well in the riding,” she said.

Having run six school board campaigns, and now entering her fourth provincial election campaign, Kennedy said enjoys getting out on the streets meeting with voters.

Also running for the seat in Beaches-East York are the NDP’s Kate Dupuis, Liberal Mary-Margaret McMahon, the Green Party’s Abhijeet Manay, and Joe Ring with the None of the Above Party.