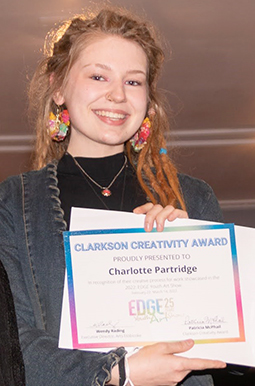 The award is a cash scholarship named for the late Dr. Austin Clarkson, a professor of music emeritus at York University. The award from Arts Etobicoke is a $250 scholarship awarded to one student from the EDGE: Youth Art Show with the goal of encouraging creativity and exploration of the creative process.

Grade 12 student Charlotte won the award for her art work called The Three R’s which was made from recycled materials.

SOLE, short for School of Life Experience, Alternative is an inclusive, student-centred, senior high school where students are encouraged to be creative, with a focus on social justice and equality. SOLE is located at Monarch Park Collegiate Institute.

Charlotte’s parents Mireille Messier and Ian Partridge are very proud of her accomplishment.

“When Charlotte heard that her piece was selected she was thrilled,” said Messier. “This is the first award for Charlotte as well. So it’s not just the first time that the Clarkson award is given, it’s also the first time Charlotte wins an award for one of her art pieces, which is wonderful.”

Messier said SOLE encourages students to come up with their own projects and then provides the freedom to work on them.

As part of her submission to the EDGE show, Charlotte was also required to write an artist’s statement on her work..

“I had spare time in art class, what better time than this to create,” said Charlotte in her artist’s statement.

“But it seemed like I had hit an art block, no ideas were coming to me. To start somewhere, I painted the canvas a single colour… still no ideas. I saw someone put a heaping teaspoon of paint on their palette and thought about how much of that would end up in the trash, it deeply upset me. Suddenly, something sparked! Instead of using new paints to create, why not use what’s already there? I brought some of the paint palettes that people weren’t using to my desk and started peeling off chunks of old paint. I used these to create my piece. Personally, art is what keeps me going in life and I love to create, but there’s no space for art on a dead planet.”

Charlotte has always enjoyed participating in the arts and SOLE Alternative is the perfect place to develop her talents.

Her teaches at SOLE including Rachel Rosen have always been supportive of her artistic endeavours. It was Rosen who let Charlotte know about the Clarkson Creativity Award.

“We likely would never have heard of this because it’s run by Arts Etobicoke,” said Messier. “And so in our area, we’re really EastEnders through and through, we probably would not have heard of this even though it is Toronto wide. So it’s thanks to Rachel that they heard about the possibility of applying for this award.”

Messier hopes that Charlotte’s award will lead to more support and funding for alternative schools like SOLE Alternative.

“The fact that a student from SOLE won, we’re kind of hoping that it will get SOLE on the radar and maybe more kids will attend, which will help, in turn, get SOLE known and appreciated by people from the community.”