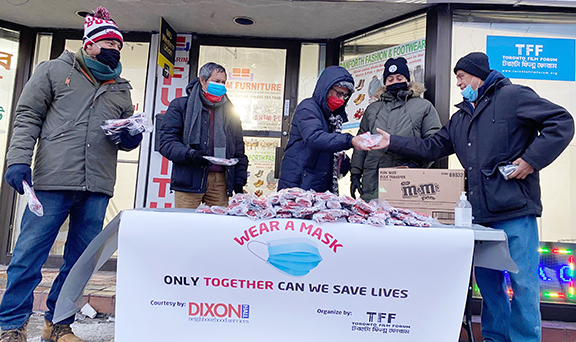 The Toronto Film Forum (TFF) returns with its Fifth Annual Toronto Multicultural Film Festival in July, featuring films and cultures from around the world and a special focus on Ontario’s filmmakers.

TTF began in 2014 as an organization of film lovers that ran monthly events including discussions and film exhibitions.

From July 18 to July 23, the Toronto Film Forum will present select independent films across three venues.

The festival begins at the Eglinton Town Centre Cineplex at 22 Lebovic Ave. in Scarborough starting at 5 p.m. until 11 p.m., said Monis Rafiq, General Secretary at TFF and Co-ordinator of the festival.

Following the opening, the festival will move to the Multicultural Film Screening Centre, at 3000 Danforth Ave. (just west of Victoria Park Avenue) from July 18 until July 22. Films will be presented from 5 p.m. to 11 p.m. and there may also be some workshops in the morning, said Rafiq.

Following the film presentations that day there will be an hour-long awards ceremony starting at 10 p.m. where three recipients will receive awards for their films.

Rafiq, who is of Bangladeshi descent, said the TFF seeks to use film to share and spread cultures from around the world mirroring the multicultural nature of Toronto.

“The main thing is that when we started the festival, our main idea was that we are living in a multicultural society,” said Rafiq. ”Where we live is multicultural. So it is very important to learn each other’s cultures properly, and film is a medium that can allow us to show different cultures to the people.”

Rafiq said he able to acclimate to living in Canada and hopes to share that experience with other people who immigrate to Canada by using film.

“We decided that this is our home,” said Rafiq. “I was born in Bangladesh, but like many people, now I’m a Canadian. This is my home. I always see that my neighbours are all people from different cultures.”

On that note, Rafiq said there have been more than 1,500 submissions for this year’s festival so far, representing between 50 to 70 different countries.

In addition to the number of countries and culture being represented, there is a special focus on contributions from Ontario.

“This year, we will emphasize film makers from Ontario,” said Rafiq. “For every 100 films, around three to five films will be from filmmakers of Ontario, and we will try our best to encourage these new independent filmmakers. We already have around eight films from Ontario filmmakers, and we hope we will get more and more within the next two or three months.”

Many of the films submitted from Ontario will also explore other cultures, languages, genders, new immigrants, and will feature indigenous filmmakers.

Last year’s festival was online due to the COVID-19 pandemic, and there will still be an online component to this year’s event.

The Ontario Art Council has partnered with TFF this year and has also helped fund the event.  The goal of TFF and the Multicultural Festivals has always been to bring cultures together using film, said Rafiq.

“We hope that sharing these films will help us build up a harmonious society,” said Rafiq. “And we will be able to be very happy living together, which is the main aim of putting on these festivals.”

The last day to submit a film for entry in the festival is June 3, 2022. For more information on entering, please go to https://filmfreeway.com/torontomulticulturalfilmfestival