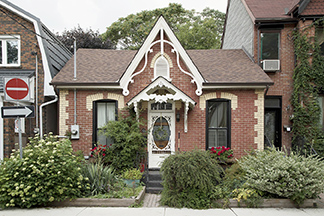 The book Modest Hopes, Homes and Stories of Toronto’s workers from the 1820s to the 1920s by Don Loucks and Leslie Valpy tell the stories behind the architecture that once made up most of Toronto. Photo above, a workers' cottage on Degrassi Street in East Toronto. Inset photos show a cottage on Lewis Street; a long row of homes of Booth Street; and a number of homes on First Avenue. Photos by Vik Pahwa.

There are many stories that go untold and a rich history in the City of Toronto that most are unaware of.

In their book Modest Hopes, Homes and Stories of Toronto’s workers from the 1820s to the 1920s, Don Loucks, a heritage architect, and Leslie Valpy, a heritage conservationist practitioner, tell the important stories behind the architecture that once made up most of Toronto.

Both Loucks and Valpy discovered their love for architecture when they were children.

“I always grew up loving the idea of the past and understanding it’s importance, but also how tenuous and how it just disappeared,” said Loucks.

Valpy had a similar story of being intrigued by and interested in the stories behind buildings.

The two authors met at the University of Victoria through the Heritage of Conservation Program that they were both a part of. Since then, they have worked together for the past six years. At one time, the City of Toronto was filled with ‘workers’ cottages’.

“If you look at these small workers’ cottages through today’s lens, their small size, very close proximity, you might mistake them as just small, cheap, disposable housing, but it’s all relative,” explained Valpy.

Loucks and Valpy’s book tells the stories of the many immigrant groups that came to Toronto from the 1820s to 1920s. The authors explain who they were, the stories of where they came from, what they left behind and their lives as newcomers.

“What life was like for these newcomers, when they first arrived, often was so little…we felt that it would help readers appreciate the enormity and the scale of the achievements of many of them as they were able to purchase or rent and live in these small houses,” said Valpy.

They came to Toronto for many different reasons, she said, many of them escaping notorious historical events so their lives in Toronto and what they were able to accomplish are true testaments and important stories to be told. For Loucks, one of the inspirations behind this book is his daughter who is a history student. “She wrote about stories that are never told and that’s the thing about these modest hopes is that people sort of ignore them because they’re small and they’re sort of similar in look and that’s it. I think they’ve been sort of devalued,” he said.

The book is not simply about how the cottages looked, but about lives of the people who lived in them.

Loucks and Valpy set out to give value to these cottages by telling these stories of the residents.

Modest Hopes, Homes and Stories of Toronto’s workers from the 1820s to the 1920s, can be purchased locally at Book City at 1950 Queen St. E. or from other major bookstores.