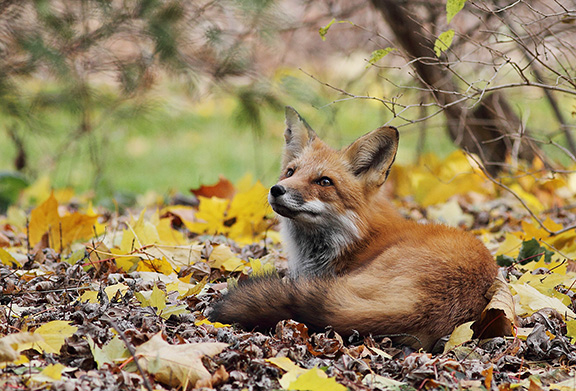 This photo of a fox near the Scarborough Bluffs ran with Ann Brokelman’s first column in Beach Metro Community News in November of 2010. Photo by Ann Brokelman.

If you didn’t know this already, let me be the first to tell you: This March, Beach Metro Community News celebrates its 50th anniversary! Congratulations on the milestone!

I often think about a chance encounter I once had with Phil Lameira, who was taking photographs for Beach Metro Community News at the same charity fundraiser that I was attending.

We ended up talking about wildlife, specifically hawks, and photography. I showed him a photo that I had taken at the Scarborough Bluffs, and he asked and encouraged me to submit the photo, and write about the story behind the moment, to the paper.

And so, thanks to this chance encounter at a charity event, I wrote my first article for Beach Metro Community News. The story, about foxes, was published back on Nov. 10, 2010, and I feel so privileged to be a part of the paper’s history.

Here is an edited snippet from that first article:

“A flash of red goes by my window. I jump out of my chair and catch a glimpse of a white-tipped tail of a fox going around the corner of my house. The next day I see a flash of red again and this time I grab my camera hoping to get a quick shot. To my amazement, when I open the door, the young fox is sitting on my front porch. Wow. You will see red foxes along the lake, beach area and local parks. Foxes will make their dens in the bluffs, but they also regularly make them in backyards, and under sheds, decks and bushes. They are so fast and highly intelligent. Most fox sightings come at dawn and dusk, but the other afternoon I had a chance encounter walking through a local park. I was looking up at a group of wildly cawing crows when something hit my leg. It was a fox, and I am not sure who was more surprised: him or me. I stepped to the right, and he veered to the left into the park. I watched on in the bright sun as the male fox then curled up into a ball, laying down on the leaves, and took a nap, wrapping his thick tail around his face. I sat on the grass behind a tree and just watched him. Enjoy the wonders of wildlife, but please do not feed the animals. The animals have adapted to life in the city, and the best thing we can do is not interfere. If you see an injured wild animal, please call Toronto Wildlife Centre.”

Over the years, I have written close to 125 articles about different animals and the natural world they live in.

My favourite ones have been about the two owlets that were born in my backyard, an ornery snapping turtle, an endangered blanding turtle, and of course the one where a police officer thought I might have been a serial killer.

Those articles are still up on the Beach Metro Community News website, under On the Wild Side, if you ever want to go take a look.

I hope to keep sharing my stories with you, and so long as I’m still able to get out and about in nature, I’m sure I’ll keep having experiences to share.

Thank you so much for your support over the years, your positive feedback, for telling me stories of your own wildlife encounters, and of course for supporting the local Beach Metro Community News.

Here’s to another 50 years!

Hi! I would like to say how much I liked reading your stories on this web page about the wild life. I grew up in the upper beach area and I would love to be able to read your local community newspaper. I now live in the Kawartha’s but really miss the beaches community. Is there a possibility of purchasing a subscription by mail?
Thankfully, Susan Slade (Dion)

Please send an email to Hope Armstrong at hope@beachmetro.com regarding your request.

Please could you comment of the establishment of the disc golf course at Woodbine Beach. I would assume that you would like to see the naturalized area be preserved for use by migratory birds in spring not trampled over by disc golfers. Perhaps you will have more success convincing the BMN, Councillor Bradford and Mayor Tory that the birds’ spring stopping place needs to be protected more than the disc golfers need more space for their recreational pursuits.

Liz
Thank you for your note and I will look into this.

Wonderful photographer and Ann’s articles are such an asset in teaching residents about the amazing wildlife that live among us. Many thanks to Beach Metro Community News and Ann Brokelman!

Thank you so much Susan. Hope to see you out in the spring looking for flowers.