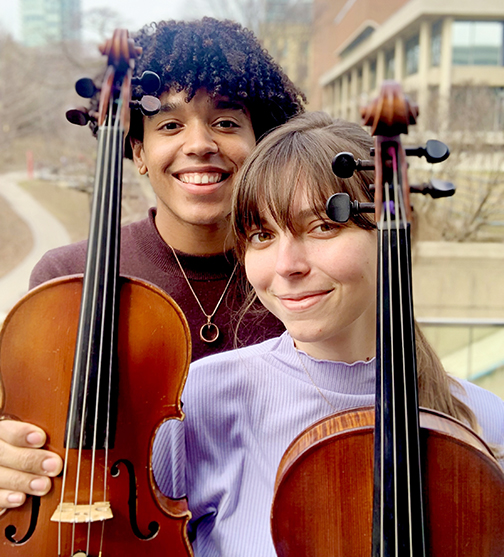 University of Toronto music students Jaedon Daly and Daphne Wagenner will be performing in the final concert of The Brandenburg Project on Sunday, March 27, at Kingston Road United Church. Photo: Submitted.

The Kingston Road Village Concert Series features its final concert in The Brandenburg Project on the afternoon of Sunday, March 27.

Lead by Violinist Mark Fewer, the performance of the Brandenburg Concertos no. 4 and 5, plus a Bach Chorale (with audience), will take place at Kingston Road United Church, 975 Kingston Rd., at 3 p.m.

Musicians performing in this Sunday’s concert are members of the Toronto Symphony Orchestra as well as music faculty and senior students at the University of Toronto.

The music students are looking forward to playing some top musicians at the concert.
“It really just is so special to work with some of the best players in the world,” said Daphne Wagenner, a first-year masters student at the University of Toronto (U of T) who is studying music performance.

“I hope whatever orchestra I end up in, if I do end up in an orchestra, that I would be able to give that experience to someone in college or even in high school, I think it really helped to motivate me again. And it really pushed me to learn my part super well as if I was a professional already and try to just really blend into their sound. It’s a different level of playing for sure.”

Jaedon Daly, a fellow first-year masters student at U of T music, also appreciates the opportunity to play with such established musicians.

“It’s a very, very good opportunity to be able to play with these musicians and we learned so much playing alongside them,” said Daly. “Because their level is so high, us playing with these people at a super high level will actually raise our bar as well, which is kind of cool. And we’ll have our own new standard for when we do these kinds of gigs with the different members of the Toronto Symphony Orchestra.”

Daly, who has been playing the violin for the last 15 years, studied at Wilfrid Laurier University in Waterloo before coming to the University of Toronto.

“I studied under the Penderecki String Quartet. That was a very tight knit university, a lot smaller than U of T,” said Daly. “So here I’m seeing a lot more people and the level might be a bit higher because Laurier is only an undergrad school, at least for music performance.”

“I went to the University of South Florida in Tampa,” said Wagenner. “I studied under a J.T. Posadas. We did have a pretty high level of music and we did have graduate students and DMA students. The professors were super amazing. They have such great backgrounds. But unfortunately, the school itself is just not known for music. The level is just kind of middle so coming here is a huge step up. It was still a great school and we did get some opportunities there as well.”

The music of Johann Sebastian Bach will be featured the Brandenburg Concertos. He is a composer who has been popular with musicians and audiences alike for centuries.

“I think what makes it so interesting to listen to it again, and again, and again, something I’ve heard 1,000 times is the interpretation and how it moulds,” said Wagenner. “But also this project is also kind of going back to how it originally was supposed to, or we tried to play originally how it’s supposed to sound. Maybe there’s a little bit of modernism in it.”

For Daly, playing Bach’s music via a string instrument provides an extra challenge.

“My take on Bach is while playing Bach on a string instrument, it’s always very difficult,” said Daly. “Bach writes from the Baroque period. So a big thing today is, we try to mimic the Baroque style on modern instruments. The instruments are actually completely different nowadays which is a big thing. And playing Bach is very challenging as well. That’s why it’s still around. Not only is it harmonically musically, very good and complex and nice to listen to, it’s good to work on.”

Tickets for the March 27 performance can be purchased at www.brandenburgprojectconcert3.eventbrite.com.

There will also be a second performance on Monday, March 28. Although it will be closed to the public, it will be streamed live at www.youtube.com/user/UofTMusic